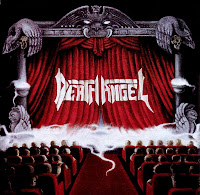 I must admit that my first impressions of Act III were mixed, as the album had such a polished, almost pop finish to it that it forced The Ultra-Violence to cry out in agony from its grave. And yet, I don't think that anyone could argue its significance, if not just for Death Angel themselves, then as a symbol of its times, a poster child for the Rise and Fall of Thrash Metal. Here was a young band playing in what at its time was one of the more 'extreme' metal niches. Sure, death and black metal had been kick started well in advance of 1990, but would take some years to reach the same level of popularity that thrash endured in the underground. They were offered a deal with one of the hotter record labels out there, and all portents pointed to their ascent into a massive, smashing success the likes of which we hadn't really seen since Metallica or Megadeth took off years earlier.

Act III was built to last. It was concocted not only to appease the legions of thrashers who had clung to the Californians' previous, pubescent punishments, but also to exhibit the band's softer, emotional side and introspective lyrics. Death Angel was now something safe to play for your girlfriend (or boyfriend) while cruising in your Mustang. It was simplistic, catchy, melodic and she (or he) could bang their hair spray-petrified curls in between spurts of ...And Justice for All or the Skid Row debut. Your Mom heard you listening to "A Room With a View" one night and then asked where she could get a copy, politely declining once you lent her your disc and she tried to listen from the beginning and ran into "Seemingly Endless Time". Act III was a versatile record, far more than the mildly adventurous Frolic Through the Park. Not only did the band bring forward a bit of that funk-rock influence from "Open Up" and "Bored", but also tempered the heavier moments with a full-on power ballad.

Max Norman, the producer here, was no stranger to tidy metal records, having worked with acts like Lizzy Borden (the excellent Visual Lies), Ozzy's Diary of a Madman, Megadeth, Armored Saint, Savatage and others. His mission here, and that of the band, was clear: put out an album that could be played on the radio alongside all the popular metal and hard rock of the day, without entirely removing the impulsive, thrashing roots from their sound. I think, to that extent, the album works successfully. It's got a 'touching' side to it, but there are also a few tunes that at least strive to beat your kneecaps in. The guitars here are punchier and thicker sounding than the prior albums, but also far less harried or frenetic, something I immediately started to 'miss' once the first few songs had spun past me.

On the other hand, Mark Osegueda is reined in here to deliver only what's necessary and nothing more. Where he might have sounded slightly irritating throughout sections of Frolic, his voice returns to a controlled fragility, falling apart only on the more conversational, silly sounding lines like in the verse of "Stop". The rhythm section sounds incredibly fluid, especially Dennis Pepa who gets to funk his face off with all the slapping and popping in "Discontinued", and I must admit that the guitars are given a lot of creative space, though it's often laid back in the mix, a sure contrast with the more brazen momentum and speed found on the earlier albums. Acoustics are taut and well implemented for "Veil of Deception" and "A Room With a View", and while the leads never really stand out, neither are they an imposition to their surroundings.

That being said, I've always found Act III to consist of about 50% memorable tunes and 50% mediocrity, though the latter is still well performed and featured some of the more accessible choices on the album. For example, while it's not a shoddy first stab at a power ballad, "A Room With a View" is not something that has stuck with me through the years. Not as played out as, say, a "Silent Lucidity", but nonetheless it's smooth, post-Beatles finish just doesn't inspire me emotionally in any direction other than to press [STOP] on my stereo. There was a time when I was far more tolerant of it, as it served as a great 'gateway' to drag friends and squares alike under the thrash banner, but today I'm almost as unlikely to desire it as I am for all the shitty glam power ballads of the late 80s. Also, I don't care much for the funk tracks like "Stagnant" or "Discontinued". They're more mechanical sounding and interesting than "Open Up" from Frolic, with a compelling use of chords and Pepa's percussive and energetic bass-lines, but at the end of the day: I didn't come to disco, you bastards. I don't need another reminder of how open minded of a band you are. I want to thrash.

THRASH. And the album just doesn't give me quite enough of what I need. "Seemingly Endless Time" is a good start, with a nice fit of head hammering aggression after the sample of waves licking some shore, and it has a nice, doomed chorus sequence with a nice flange running through the guitar, Osegueda picture perfect as his melody slices above the haze. "The Organization" and "Stop" both feature some passable riffing, the latter a rather unforgettable pre-chorus in which Mark channels pure Joey Belladonna and then he and the boys explode into the line 'I wanna talk about it' which seems like they're visiting the office of some abuse counselor. I also wouldn't kick a few of the later cuts out of bed for crackers, like "Ex-Tc" or "Disturbing the Peace", but then, they don't really offer much when one dials back the clock a few years and submerges his or herself into an "Evil Priest", "Mistress of Pain" or "Kill as One".

There was a time, many years ago, when I was about 16 when I would have lauded this album more than its predecessor Frolic Through the Park, but after two more decades of exposure I must admit that this takes a dip even below that in its overall resonance. What's more, Act III must be seen as some sort of failure. They released singles and videos, it seemed to be doing quite well and probably even charting somewhere, and yet it just wasn't enough to throw them into the big leagues alongside West Coast titans like Metallica, Megadeth or even Suicidal Tendencies (who, along with Death Angel, also released one of the more polished thrash albums of 1990 in Lights...Camera...Revolution). Perhaps part of the album's crippled success was due to the injury Andy Galeon suffered the following year, which put the band's touring on hold and eventually dissolved them (not a dishonorable disband, since these guys were blood and very close and I rather admire that they wouldn't continue). But I can't help but think that it was the rather gimped fortitude of the songwriting here that stuck the final nail in their coffin.

Act III is by no means terrible, or even bad, and it does exhibit some growth even if for the wrong reasons. For example, the lyrics are better than Frolic Through the Park's childish tripe, and the musicianship, if restrained, is still impressive. However, a glimpse back at some of the legendary records it was facing off against, like Rust in Peace, Painkiller or Seasons in the Abyss reveals a rather shallow resilience. Those albums were dazzling our imaginations, knocking us into kingdom come, and haunting us from the shadows in the corner, but Act III was just sort of buffed, burnished and unassuming, with so little of that unwashed, incendiary potential that Death Angel displayed early on.