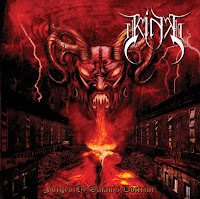 I haven't got a wealth of experience with the Colombian death metal scene, but I do know and enjoy a few of their more prominent acts like Internal Suffering on occasion. I'm certainly well aware that there's quite a lot happening there, to the point that only Brazil could boast of a larger extreme scene in South America, and the relative newcomers King give us another clear reason to pay our respects. This is their first release through Deathgasm, and it collects a lot of the material from their prior EPs Nonlaughter (2005) and Emperor of Darkness (2011) into a single, consistent recording while adding a handful of newer written tracks.

The first thing I was hearing once the black smoke cleared off the freakish, tribal horror intro "Summon Shub-Niggurath Ye Black" was a ton of Krisiun-like, relentless momentum focused heavily on blasted drums and punctual, chugging onslaughts of palm mutes, octave chords and squeals. But to date them further back, one must obviously evoke the names of Deicide and Morbid Angel: the first for the Glen Benton style of meshing brutal grunts and snarls together into a unified, blasphemous voice; and the latter for a lot of the percussive grooving and rapid, thrash-evolved licks that inhabit their compositional architecture, almost a hybrid of Covenant and Blessed Are the Sick. Tracks like "No Pray, No Mercy, Just Death (Unpromised Satan)" and "Emperor of Darkness" are incessant cases of assault and battery which level the listener's senses like a swarm of giant hornets wielding jackhammers.

But this album never really suffers the fate of numerous other brutal death recordings, since this King is gripped by enough fits of creativity that they break up any potential, ruthless monotony with slower, grooving cuts ("Macabre Satanas") and some excellent, agile bass playing that builds a second dimension to the punching and kicking of the primary riffs. Some of the picking patterns used by the guitarists are unbelievably frenzied. I also hear a bit of blackish metal influence, but it asserts itself more with their sheer speed and anti-Christian lyrics. In the end, I can't say that Forged by Satan's Doctrine is all that original, nor is it stuffed to the gills with truly impressive, memorable riffing patterns, but the Colombians hit low and hard enough that they're probably worth checking out whether you enjoy old school Floridian death, modern USDM of the more intense East or West Coast varieties, or the fellow South American onslaughts of Rebaelliun, Krisiun, Ancestral Malediction or Internal Suffering.