Hellvetron - Death Scroll of Seven Hells and Its Infernal Majesties (2012) 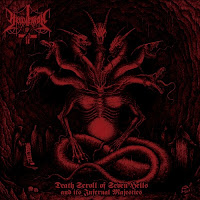 What I love about an album like Death Scroll of Seven Hells and Its Infernal Majesties is how you go into it expecting one thing and then come out having experienced a different sound. The logo, the din of the red and black cover with its draconic, 7-headed abomination and the title all read like a pretty standard occult black metal experience, and there'd be nothing wrong with that, but Hellvetron surprised me with their sluggish, evil blackened death/doom pacing and the effective revulsion of Alal'Xhaasztur's monstrous growls and snarls. This guy sounds like he's howling out proclamations throughout crimson stained skylines and cavernous depths of the Seven Hells, amplified enough that all the tortured and damned cannot escape his edicts regardless of their individual, eternal punishment. And I don't think he's announcing the next ham & bean charity supper over in the city of Dis...

But a diabolic front man would be nothing without the support of the music itself, and here the Hellvetron also succeeds. Ominous, drudging beats are laid out below the raw, filthy guitar tone. Doomed, drawling chords are interspersed with primordial late 80s death metal tremolo guitar lines which occasionally scale into a higher register like redeemed souls that are on the verge of escaping the conflagration until they are suddenly jerked back down by their horned and hooved tormentors. Haunted, brooding chants and other atmospherics are asserted liberally wherever they can exponentially improve the sheer horror of the spacious, reverb saturated gutturals, and let's get something straight: you will not come away from this album smiling unless you are one of the sickest fucks in all Creation. It is the stuff of pure nightmare, just as subterranean and menacing as any of the 'cavern core' Incantation clone death metal, and the Old Testament-rooted darkness of the titles and lyrics make it all the more harrowing and 'ancient' in tone.

Occasionally songs like "Abaddon - Wings of Perdition" and "Gehinnom - Hellwomb of the Impure Hag Queens" come to these points where they seem more calamitous and less structured that the surroundings, with more off-kilter drum fills and no central riff to drive the funereal burden, but even then they never drag down the writhing, crawling torment of the vocals. The fact that the album is about 25 minutes long also doesn't hurt, since you'd generally associate this sort of slower paced project with mind numbing, repetitious torture and 10 minute 'compositions'. Hellvetron turns this and several other assumptions on their sides, and then violates them with an inverted cross until they scream 'uncle'. I can't say that I was gripped by the actual riffing through much of Death Scrolls, since its secondary to the arching, foreboding atmosphere, but its antiquarian horrors should earn it much praise, or at least conversation. With stuff like this and Bahimiron coming out of Texas, who knows what lovably disgusting, ungodly beast the Lone Star State will turn loose on us next...