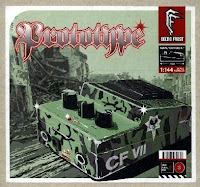 Prototype is both the strangest Celtic Frost recording and what might lamentably represent the biggest identity crisis in their history, but unlike the Nemesis of Power demo 10 years earlier, I can hardly blame it for laziness or lack of trying. Self released with gimmick guitar pedal packaging and brazen album title, it looks nothing like any of the band's backlog. In fact, if not for the Cold Lake icon in the right corner, the 'CF VIII' scrawled across the bass of the pedal, and a few of Tom's vocal lines through the heavier tunes, it would be quite difficult to qualify as a true Celtic Frost release, but more of an extension of Warrior's work in the industrial metal outfit Apollyon Sun in the later 90s. That said, Tom's mainstay was no stranger to experimentation, and so I can't say I was highly surprised when I first heard this. Only that it hadn't arrived sooner.

Protoype has a more sleek, modern production than anything Warrior had written to date, and the substantial track list leads me to believe that it was intended as some 'missing link' full length to fill in the gaps of the band's history. Sadly, though, it's quite thoroughly awful, despite the rather eclectic mix of ingredients. Normally I have no opposite to the inclusion of electronics, or even pop and hip hop elements to a heavier recording if they contribute to some sense of intrigue, compulsion or just some damn catchy songwriting, but here they seem misused as a tired set of cliches, a very 90s-esque 'open mindedness' that seeks to force an exhibition of the band's diversity. At its very best, the demo/album is competent and subtle with its external influences, but at worst it's a dire mockery of all good taste, tragically lame to the point that it takes on a bad, cartoon-like quality...

Let's just say that, from where this demo BEGINS, you have little to no idea how it will END, but we're not talking about unexpected thrills or 'twists' that one might deem pleasurably; rather an air traffic accident that initially seems as if it will cause only minor structural damage to a craft's landing gears but then ends up on the nightly news, hundreds of dead being pulled from the still smoking wreckage. Essentially, the first two tracks are a sort of 'trance' techno, with beats that loop alongside a modicum of glitch electronics, feedback and ominous, crunchy bass against the backdrop. The cyber rendition of the Beatles' "Helter Skelter" is quite interesting, and even if I don't dig how the lyrics grind across the heavily affected guitar samples and beeping noises, it was at least worth a try. "Totgetanzt" is an original, with even sparser, pulsing textures, sinister breath whispers and cheesy keyboard beats, but nothing as interesting as the cover ever occurs.

And then we come to the 'heavy' sequence of the demo, where drudging, muted guitars are affixed to drum machine and samples in a means redolent of Pitch Shifter, or maybe the late 90s Prong material with enhanced electrics. Warrior gets rather aggressive with his vocals on "The Dying I" or the occasional guffaw in "Human Dirt", but elsewhere he uses a sort of nasal, whining vocal that reminds me of Jonathan Davis from Korn. The lyrics are quite miserable through this portion of the track list, with a lot of generic call and response style chorus parts and generic 'what I am what I am what I am' ("Human Dirt") effortless bullshit lyrics that were a heavy symptom of bad 90s alternative rock, industrial, early metal core and groove/nu-metal. The heavily atmospheric electro rock duet "November" features Tom's whimpering alongside a female guest, and "Deep Inside" (one of two Apollyon Sun tracks that wound up here) is a passable trip hop tune with some psychedelic guitar swirl backing the chorus, but even the latter becomes incredibly cheesy when it hits the classical piano bridge with the girl whispers: 'deep inside deep inside'. Oh so sexy, guys! Not.

But, honestly, I'd take ANY OF THIS over what happens at the end of the demo, where it transforms from merely misspent creative energy into an outright abomination, as if a bunch of ICP juggalos decided to stick bananas in their wrestling thongs and then invade the recording session, bribing Tom with drugs to let them in the studio booth. "Get Wicked (dagger and grail edit)" is some weird interlude with a dude rapping in...French, I think? It's bad enough that we must suffer its reckless stupidity, but the guy actually has the audacity to include the phrases 'get down get down' in nearly the same breath as he cries 'procreation of the wicked'. At this point I am well on my way to caving in my face with handgun rounds, but Prototype actually gets WORSE, with the heinous and inane "Hip Hop Jugend", a hybrid of porn electronics, bad German Rammstein rambling, smutty 'ooh baby aah baby' female narrative and a bunch of manly Eurotrash shouts of 'Hip Hop Jugend' in the background.

Seriously, I dare anyone to listen through this song and then tell me again how miserable you think Cold Lake is. If you can make it through without cracking a smile or choking on a combination of laughter (at it, not with it) and vomit, then I certainly owe you a beer. But trust me, it will haunt you forever...the final nail in the coffin of failed ideas that permeate Prototype. As we all know by now, this direction was not one Warrior and Ain pledged to continue, its awkward and unnecessary mutation silently sealed away in vaults of agonizing regret that only a handful were so unfortunate to experience. Monotheist would later steer the band back on track, an acceptable compensation for 10 years of bullshit, but personally I'm not sure it could ever outlive scars like this.