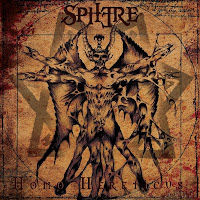 Sphere is another little known Polish death metal entity which has seen about a decade of existence, but one I've encountered before. Their 2007 debut Damned Souls Rituals was a well rounded, if not wholly original effort that boasted some excellent production values and dynamic songwriting. Sadly, it never quite got the exposure that some of the band's countrymen have been receiving in recent years, an unfortunate byproduct of a scene so soaked in talent and potential that it suffers from 'too much of a good thing'. When monsters like Trauma and Lost Soul can't garner much attention, the chances for a band like Sphere to reach a wider audience are just not that high, and it's unfortunate, because they've got just as much to offer as several of the Polish forerunners like Decapitated (who have not written good music in over half a decade) or Behemoth (a solid band, admittedly, but for some reason I prefer their pre-rockstar era when they were still a raw black metal act).

Homo Hereticus picks up where Damned Souls Rituals left off in offering a good deal of variety and taut, intense songwriting which seems to leap right out of the recording and smack you upside the head. There's no direct influence I could cite over any one other, because they draw from a wide variety of brutal USDM, Polish peers and even a steady course of death/thrash that breeds a lot of excitement through the riffing architecture of "Forever Sworn to Blasphemy" or "Third Scent Carcass". Walls of blasting, double bass artillery and steady driving rhythms are soaked in fluid, punchy guitar tones that continuously place their fist in your gut while spikes of arpeggios and atonal melodies provide an extra, subtler dimension. I also enjoyed the ridiculous froglike gutturals that would well up in several spots like oil through virgin soil. In addition, the intros to a lot of tracks like the creepy organ before "Holistic Paralisys" or the keys and choirs that herald the thundering aggression of "Grave's Cold Darkness". These ambient inaugurations contribute to a firmer balance of atmosphere and savagery than one might expect from the tone and construction of the guitar progressions alone, but they also remind me of campy horror B-movies from the 80s which is never a bad thing.

Not all the punches thrown in this melee are equal, though. There were certain cuts here which I felt were less inspired or interesting in terms of the guitars and structure. For example, the brazen punkish momentum of "Sadistfuktion" reminded me of a lot of modernized death grind with roots in D-beat, like Nasum or Napalm Death, but the choice in notes did nothing for me. Also, a few tunes rely a bit too heavily on generic moshcore chugging sequences like "Psalm to the Dark One", which was rather forgettable. Then again, for each of these you've got something like "Devils Reunion" with its acrobatic, clinical death-thrashing verse rhythms that had my neck in a brace in just two minutes of ill advised exertion. In the end, Homo Hereticus is far from perfect, but the crackerjack drumming, muscular bass lines, blunt and caustic vocals, and the wide, indefatigable selection of guitar riffs ensure that it's worth checking out, and that Sphere earns some measure of respect against the flooded backdrop of their scene. I enjoyed it a mere fraction less than their debut, but I think its corpulent, loud production and ardent musicianship should attract an appropriately carnage-questing clientele.