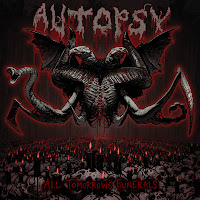 Having no love for Peaceville's worthless 2001 Autopsy compilation Torn from the Grave, it was only natural that I might approach All Tomorrow's Funerals with some trepidation. With its grim spin on a popular Velvet Underground song title and a shit ton of familiar looking tracks, I wasn't expecting much value, but thankfully the band itself had a heavy involvement in remastering much of its content, and saw fit to include a few unreleased tracks to bolster its worth to long-term fans who possess the original incarnations of the studio material and weren't exactly begging for a re-issue.

Essentially, the band have reprinted and remastered all of their short form EP releases down through the years, an obvious boon targeted at younger fans who might have difficulty in tracking down the original copies without paying exorbitant prices on auctions or in specialty record shops. They're placed on the disk in a reverse chronological order covering roughly tracks 5-21, so The Tomb Within (2010) is followed by Fiend for Blood (1992) and Retribution for the Dead (1991). Having already covered these releases individually, I will say that I got a lot more out of the Fiend material than anything else in its new format, which sounds a little cleaner while losing little of its repulsive, thick and frivolous Steve DiGiorgio bass or the ghastly, loose-structured sense of fun that it originally conveyed. More interesting by far was the inclusion of the two tracks from the Horrific Obsession single, recorded in 2008 and released early the following year.

As I missed this pair the first time around, I found them a bit of a thrill here, wedged between The Tomb Within and Fiend for Blood. "Horrific Obsession" itself is a crude, bludgeoning gutter-death track with sludgy, pumping bass lines and Reifert's caustic throat dominating the action; "Feast of the Graveworm" one of the best songs I've heard from the band since the first two albums, with freak melodies and grimy, primordial tremolo rhythms that blaze into an excellent, wild breakdown groove beneath the lead. Hell, if half of Macabre Eternal had been this bloody good it might have made my short list for the end of 2011. They've also included a final remastered version of the track "Mauled to Death", which had appeared on their 1987 demo and seen a few re-issues on the comps Awakened by Gore and Ridden With Disease, but is rendered here with an appropriate, ghastly production that matches it to The Tomb Within material in tone, and it sounds absolutely great. "Funereality" from Acts of the Unspeakable has also been shoved into the lineup with a minor mastering facelift.

Even with the obvious love given to the older material, some will want to dive right into the new flesh, and I doubt they'll be disappointed. "All Tomorrow's Funerals" is fast and inspiring, with raw and spring coiled guitars that wend their tremolo hostility over one of Reifert's most abusive performances in history, transforming into a churning groan over the death/doom breakdown that will have all the old morgue crew slamming about their environment like restless, corpses. "Broken People" is nearly as fun, opening with a murderous, muddy charge, lead guitar ablaze and then a gradual devolution into an amazing death/doom bridge with steady, tribal drums that transition into a straight rock beat while the dual, solemn melodies cascade about the track's cavernous breadth akin to classic Paradise Lost circa 1990-'91. "Maggot Holes" has a further focus on the escalating percussion, with a lot of droning, drudging guitars and ringing higher strings that create a brutal hypnosis.

About the only 'new' track I couldn't give a shit for was the closing snippet "Sign of the Corpse", more or less an outro fadeout with some reversed guitars to mark its exit. Otherwise, the lion's share of the content here provides quite the rush, doubly so if you were not previously the owner of the various EPs. If you do, then the overall value of this compilation is slightly diminished. There is something special about experiencing Autopsy in its crude, lewd original form, so I can hardly dub the remasters mandatory, but the new songs are good, Horrific Obsession rules, the original covers are included for you to gaze upon, and it makes for a nice compliment to a collection of the full-length albums, whether you fancy the double vinyl or CD. In fact I feel All Tomorrow's Funerals is probably the best single compilation from the Californian creepers to date.