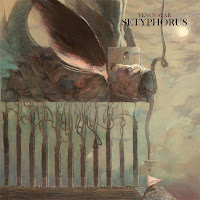 From the beautiful, surreal cover artwork to the opening trudge of "Blessed Abomination", Venus Star's sophomore Setyphorus had me immediately enraptured by its creative contrasts. Alas, this early fascination would not last through the full 34 minute flesh of the LP, but I won't deny that there are some crushing components to their hybrid amalgamation of black and doom metal that, if further played to their strengths, would manifest in one of the heaviest bands in all of Europe. Not to say that this album itself is not 'heavy', because there were points at which my hands and jaw were shaking from the conflagration of immense tone and throat-cutting snarls, but I found my curiosity ceding in direct correlation to the faster sequences, in which moderate blasts are applied to lackluster, grinding chords.

For the first two tracks, at least, I was thrilled. "Blessed Abomination" provokes an airy gloom through a choice in dire, melodic chords that drew me back to earlier Paradise Lost albums, if they had been dowsed in feral rasping the likes of which we find in other Finnish bands like the great Horna. The second, "On the Headless Cross" revels in its drudging, down-tuned murk with an enormous groove that directly recalls the UK abomination Godflesh in its late 80s prime ("Like Rats"). The sections at the end where the guitars drop out for the bass is simply incredible, the distortion so thick that I felt someone was stirring batter in my brain. But other tracks, like the monotonous mid-blast "The Abyss Opens" leaves much to be desired, and it's not alone in causing a craving for more of the slower paced sorrow and sludge that created such a poignant, stirring start. To be fair, there are other gems deeper into the album, like the brooding yet strangely beautiful instrumental finale "Bloodbird", but it seems each time I'm feeling a song there's another next to it which is less inspired.

To his credit, Atvar, the individual responsible for this clamor, does a great job of steering its overall aesthetic away from those of his many other projects. For instance, Venus Star is not so traditional as Prevalent Resistance or so eclectic and conceptually framed as Circle of Ourobouros. Setyphorus is 'its own thing', and the fact that he can maintain such distinctions is admirable. I'm intrigued by the short and stark imagery that pervades the lyrics, the murky broil of the low end production that forces the bass and chords straight into my midsection; and as already mentioned, the artwork. The deep, swamplike production is a good fit to the crude compositional level, and its all heavy as balls. It's just unfortunate that the tracks are about a 50/50 hit or miss: they'll either flood your imagination with weighty, welcome grooves or turn out your attention with concussive abandon. Not a bad record by any stretch, but I couldn't help but feel Venus Star is capable of so much more.
Verdict: Indifference [6.75/10] (I see the colourless universe)
Posted by autothrall at 8:28 AM