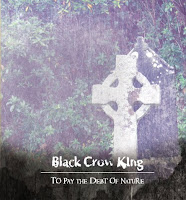 It might look relatively harmless, but trust me when I tell you To Pay the Debt of Nature is one of the most painful experiences I've had in recent memory when reviewing a metal album. Not painful as in 'this sucks' painful, but painful as in it will rip your fucking ears off and then violate the gaping, bloodied virgin orifices newly opened to the world around them. Part of this is in its volatile production, but also the pure tearing black metal rasp of its author, the fuzzed out offensive guitar tone and the eerie implementation of atmospherics which you can so barely make out at times through the canopy of sluggish carnage that you feel as if you just might be hallucinating them. To Pay the Debt of Nature is more torturous than when my girlfriend subjugates me to a road trip marathon of the cheap country pop pageantry she so loves...

Oh, Black Crow King will try to fool us for a few minutes with the distorted, atmospheric inertia that inaugurates "I, Crow". Dissonant, noisy picking rings out over the roiling, distant feedback, but once the charnel evisceration of the vocal arrives, you know things are about to head south quickly. Strangely, this music is not without some measure of inherent beauty, since the droning guitars often configure into shining, melodic patterns, but it's easy to lose this in the ensuing carnage. Percussion is optional. In "I, Crow" or long passages of "Grotesque Existence", the drums are omitted completely to allow the rest of the conflagration to breathe, but in other places the Crowlord will incorporate minimal tribal beats (the opening to "The Shadow Falls") or eruptions of chaotic clamor as found in the depths of "Vengeance" or "Crowbait". With the exception of "Vengeance", the individual slaughterscapes are quite long, from 8-17 minutes, and this contributes to the torment, tallying up the ruptured organs of its audience the longer they are able to hang in the game.

But strangely, even at its most overblown and swollen, the 17 minute closer "Excarnation Ritual", To Pay the Debt of Nature is never monotonous. As grating and irritating as it might prove, the feedback and disheveled structure of the compositions ensures that you're never quite hearing the same thing twice. It seems to be an equal balance of measured malice and improvisation, and thus despite its malevolent thanatopsis, Black Crow King seems curiously transitive and 'alive'. Direct comparisons to other acts are difficult, because you'll perceive everything from Skepticism to Burzum to Merzbow to Electric Wizard beneath its blasphemous eaves. Elements of post-rock, dark ambient, drone, funeral doom and even pure noise are cast about its sweltering bulk, but it never rests its withered laurels upon one particular category...

I can't give this debut the strongest of recommendations, since it's quite likely to erode the sanitary of many who would dare its depths, and I really don't need the lawsuits right now. It also does occasionally come off as cluttered and directionless, due to the sheer lack of structure that defines it. It's not an experience I'm apt to repeat often. That said, if you're a brave soul and seeking a paradigm shift in your perceptions of just how harrowing a musical recording can be...then Black Crow King is pretty much your last stop before entering the realm of pure, undiluted hell-noise. Wear a flak jacket, make out your will and say a prayer to whatever made up deity might comfort you.