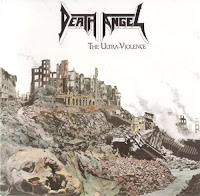 The Ultra-Violence is another of those unripe, ripping West Coast speed/thrash metal experiences so unique to its point and place of origin in the mid-80s. Kill 'Em All. Killing is My Business... Show No Mercy. Bonded by Blood. Darkness Descends. All of these albums shared a distinction in that they felt fresh in composition, limitless in potential, and most importantly timeless in their transgressions. An album like this has simply never lost its luster through the ensuing decades, and in fact it remains a more memorable, grisly and violent gem than anything released later in the Death Angel canon. The groove and funk-inflected subtext of Frolic Through the Park, the friendly and cleanly Act III; neither was bereft of a catchy track or two, but both seemed rather underwhelming when paired off against their malicious predecessor.

What's perhaps even more staggering about this album than many of its peers coming out in 1986-89 is the sheer age of its creators. These guys were jamming and hitting the studio when they were still young teens (their Kill as One demo was recorded in 1985 with Kirk Hammett of Metallica, of all people). While every city and suburb at the time might claim dozens or more metal bands forming between high school friendships and cliques, and gods know later youthful extreme metal acts would surface and impress (Decapitated anyone?), how many in the middle of this particular decade were actually this talented? Death Angel could not only write effective songs that surpassed, but instrumentally proficient. The Ultra-Violence was perhaps the greatest 'teen thrash' album in history, certainly the best of that California rush, and as one who was only 13 myself when first acquiring and experiencing it, in a word: inspirational. We could do this! We pimply, misunderstood, emotive rebels across the States and beyond who dug our consciousness into our earphones to escape the burdens of pending adolescence were also capable of tearing the goddamn house down! Death Angel our living proof!

Not only that, but there was an air of ethnic novelty at work. Certainly there were many Asians and Asian-Americans into metal music, and Japan in particular had produced a good number of acts by this time, but Death Angel was the first band of Filipino descent that I was personally aware of, all its members related. Not a detail that inherently imparts or detracts any value to the music itself, but firm evidence of how wide a cultural influence was capable through this genre. Today, the easy access via internet to essentially ALL extreme music has created a mass exodus towards the fandom for people of all cultures and nations, with Southeast Asia becoming a specialized hotbed for underground brutality, but just imagine how scarce the market might have been in Death Angel's heyday? I can only imagine what a stir these guys must have caused through their homeland connections, what the reaction might have been for better or worse to see these guys whipping their hair around in lethal unison.

Beyond any of these fact, however, The Ultra-Violence simply kicks ass, taking no prisoners in its drive to rack up as many casualties as possible. The foreboding, post-apocalyptic ruin and petrified skull on the cover, when matched to a title derived from A Clockwork Orange, promise a whole lot of pain, and to that extent, these youngsters more than followed through. Harsh and threatening, yet not lacking in a sumptuous dynamic range, the 45 minutes of the debut prove both substantially solid in terms of individual track quality and versatile as a whole. I mean, for fuck's sake, the band has incorporated an 10 and a half minute instrumental component in the title track; and even if the opening, higher register guitar melody is somewhat reminiscent of, say, Iron Maiden's "Wasted Years", there is no disputing the amount of effort that went into its arrangement, from the wild and psychedelic shredding deep in the bridge to the assemblage of concrete neck-jerking rhythms that lead up to it. And this is easily the worst track on the whole of the album...

In general, we were dealing with more restrained, verse-chorus patterned songs in the typical hard rock or trad metal mold, not unlike how Slayer or Exodus were composing but with every bit the same amount of passion and kick. Driving, crisp guitar tones dispensing bladed hostility in the tremolo mutes that introduce "Evil Priest", or rifle through the verses of "Mistress of Pain". There was also some mid-paced, destructive palm mute chugging for mosh pit genesis, but what I found truly distinct about Rob Castevany and Gus Pepa was their penchant for original, screeching guitar effects in both the leads and prevalent spikes of melody that were constantly threaded over the architecture of the rhythm guitars. Sometimes wild and unchecked, others more structured and important to the momentum of the thrashing, but always unique when compared to, say the wilder, unbridled spasms of a King or Hanneman, the dextrous finger exercises of Mustaine or even bluesy bombast that provided a foundation to Hammett. Perhaps one could not chalk this up to the duo's age or cultural background, but unquestionable a very individual tone that was rare among the Bay Area, East Coast or Teutonic scenes.

Another standout here was vocalist Mark Osegueda, who had a spirited, acidic bite to his tone which was both natural and viral, whether dwelling in a mid range or the occasional shrieks he applied to the tail end of his phrasing. About the only person I would really compared him to might be Joey Belladonna of Anthrax, but lacking that same, nasal monotony despite the same tendency to remain with a cleaner voice. He's especially important on the menacing cuts like "Evil Priest" or "Voracious Souls", two of the best in all the band's catalog, for how he comes off like a living scythe in contrast to the thrust of the rhythm guitars. The drums and bass on the album are also noteworthy, if not the most immediately notable factors. Andy Galeon was no Gene Hoglan, but then, the guy was 14 when this album came out, and had a firm grasp of the standard metal beats which he would accent with some double bass and lots of instances of tinny fills on the cymbals and hi-hat during tunes like "The Ultra-Violence". Dennis Pepa's bass breaks were amazing when left to stand on their own like the distorted twist at 4:40 of "Thrashers" or the grooves plugging along under the acoustic in the "Voracious Souls" bridge.

If I had to chart the band closely alongside any one peer, it would likely be Metallica if only because the thunder of the faster guitars often drew me towards nostalgia for Kill 'Em All or Ride the Lightning. For instance, the opening onslaught to "Evil Priest" was similar to that of the post-intro riff in "Fight Fire With Fire", or the steady moshing gait of "Final Death" redolent of "Creeping Death" or Metallica's cover of Diamond Head's "Am I Evil?" However, who the fuck wasn't inspired by those living gods of the 80s, and mindless of this, there is no doubt just how abusive and potent tracks like "Evil Priest", with its little pinch harmonics or "Voracious Souls" with its intensely excellent grooves and verse triplets were, among the greatest that the West Coat EVER produced during the rise of thrash metal to prominence. Nearly everything from the frenetic melody that inaugurates "Thrashers" to the bass-driven instrumental finale "I.P.F.S." and its frenzied, fist pumping climax is enjoyable to this day, with the one exception being the bloated title track that, while not incompetent, might have been better served by a split in size and the addition of vocals to its better riffs.

In the end, though, there is enough charisma to this record that the minor inconsistencies of its minutia are easily cast aside, that it belongs in the collection of any discriminating lover of 80s or later thrash, speed, or even filthier trad or power metal. The lyrics were fairly strong considering the band's age at this time, paeans to psycho killers, gang bangers, sadistic succubi and devil worshipers alike. Granted, beginning your thrash album with a song called "Thrashers" might seem trite now and possibly even in 1987, and later lines like 'the thrashers will put you to shame' ("Kill As One") might seem like a limp, insular promotion of the band's chosen subgenre, but they were not alone in this, and in general the lyrics provide the incessant flood of violent and efficient imagery appropriate for the underlying composition. This is the best Death Angel to date, and its production holds up just as strongly as its songwriting. Semi-accessible like all the stronger West Coast albums of its type, but nonetheless predatory and punishing.
Verdict: Epic Win [9.25/10] (lustful doings not foreseen)