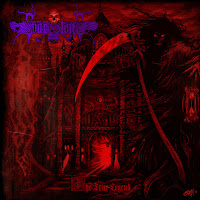 As sharp as it looks with its hellish new design, The True Legend is not actually a new album of original Svartsyn tracks, but a partial re-recording and remix of their 1998 debut on Folter Records. The Swedish black metal veterans have gone all out to address numerous issues with the material's older incarnation, and thus it sounds practically like a different band. Some listeners might balk at such a decision since the revisions sounds a lot more polished and meaty, but trust me when I say that the changes are like night and day. The old version sounded like it was recorded in a toilet somewhere in the dregs of Malebolgia, where this new skin is fresh, pummeling and even more vicious due to the vocal mix and sheer, gut wrenching fiber of the guitar tone.

Some may rue the fact that the track "Goatthrone" from the original is omitted here, but the rest of them remain and maintain a rapt portrait of diabolism that is quite headbangable. The guitars in "Cursed Blase from the Castle" or "Snake in the Garden of Eden" ooze with simplistic, fulfilling chord rhythms, their archetypes rooted in the savage, rocking momentum of old that was once pioneered by acts like Hellhammer, Bathory, Mayhem and Bewitched. There are some blasted sequences for those more enamored of the Dissection, Lord Belial, Sacramentum variety of Swedish melodic black woven throughout the 90s ("Ghoulhaunted Forest", "Shadows Painting My Eyes"), but in general I found that the more mid paced or punk-fueled rhythms throughout the album were its clear strong points. Most impressive, though, are the vocals of Ornias which are brutal barks that sound like a pack of attacking hellhounds. Rapacious, reverbed vitriol at its finest, and they help compensate for the relatively average, barbaric lyrics.

The guitar tone reminds me a bit of the modern Arckanum recordings. Rich, strong and fluid, though the actual writing isn't all that similar beyond the overarching black metal components. The drums are tight, the bass pumping and the dynamics wide enough that the songs stay fresh even when their riffing patterns seem contrived or less appealing. Personally, I found the sound of the original album to be quite restricting, and thus greatly preferred their sophomore ...His Majesty (2000), but this fresh coat of paint goes a long way towards fixing its production issues. I wouldn't say that The True Legend suddenly becomes an amazing, unforgettable experience, or one of the better records in that Swedish class of later 90s, but its a facelift well deserved, and in all honesty I'd be just as likely to break this out as their recent records like Wrath Upon the Earth (2011) or Timeless Reign (2007). It will be interesting to see if they implement a similar sound to future efforts.