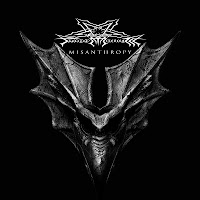 I admit I don't know a lot about this 20+ year, long-term Polish extremity's early work, either as Pandemonium or their years under the moniker Domain. However, I found their 2007 album Hellspawn to be quite a refreshing hybrid of the black and death metal genres which harbored a peculiar, exotic flavor to it. This sense of ethnic and atmospheric worldliness has been carried forward for their latest full-length, simply labeled Misanthropy. We're not talking Therion here, or Hollenthon, but a strong use of female guest vocals, and melodic, arabesque guitar lines that lend an impressive edge to the material which begs for repeated experience. However, even these eclectic tendencies here must take a bow and stand aside for the true star of the album: the intense contrast created by the overbearing and entertaining vocals (both growled and rasped).

Pandemonium focuses on rather simplistic, moody black metal structures but then covers them in this enormous, tortured voices that instantly increase the effectiveness of the riffs below them. Often they'll use a whispered, central drawl and then layer it with rasps on one end and painful growls on the other, but there is this constant, pervasive sense that you're being flanked by a panoply of psychopaths who are warning you of the End of Days, and it's admittedly quite frightening, even if a few aspects like the more repressed rasp-like vocal is nothing innovative. The drumming is loaded, with a lot of muscular mid-paced rhythms driven by brick-like double bass that support the guitars like pillars in hell. There's a surprising level of melody here for a band so dark and oppressive, often culled through the traditional use of tremolo picking but also in the glint of some of the cement chords, and thus tracks like "God Delusion" or "The Black Forest" convey a very full-bodied balance of both torture and obscure beauty. The bass does seem to get a little lost under the staggering weight of the guitars, but it's not inaudible.

It's a little hard to place the band comparatively: I was as often reminded of a usual suspect like Mayhem as I was of the bombast of Finnish bands Barathrum or Ajattara, but inevitably they have something distinct happening here which involves a bit of death metal undercurrent (especially in "Everlasting Opposition") or even some morbid, apocryphal doom drudgery in songs like "Necro Judas". The aforementioned female vocal lines are affixed to the gutturals in "Stones Are Eternal", and create this implacable bazaar of darkness that lurches into a miasma salacious snarling and mighty, grooving guitars that perfectly carry and collapse the mystique. At one point, the vocalist Paul is retching out these resonant gutturals in a sort of percussive pattern which sounds almost like Peter from Vader. Massive and stunning, this is probably the best song on the album and one of the best I've heard lately, almost like a clash between Triptykon and Barathrum with better vocals. But really, the whole album draws you in like a serpent charmer while it lasts. Many of the riffing progressions might not seem that intriguing individually, but Misanthropy as a whole proves a harrowing experience that I'm not like to forget any time soon.