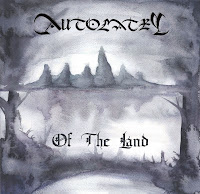 So often do I spend aurally roaming metal scenes the world wide and seeking out new (and old) sounds that I very often neglect to pay much attention to what's happening in my own back yard. To be fair, Connecticut is not exactly a stone's throw away from my present haunt in Witch City, Mass, but I still feel a sort of surreal kinship and personal obligation to laud and expose those New England artists who are worthy of attention. Thanks to some initiative from their guitarist Dave, I can now add Autolatry to this number, a quintet which plays a curious blend of progressive black metal that I simply do not hear much from the Northeast area, but possesses all of the potential and professionalism you'll rarely hear in bands with twice or three times the history and experience.

Don't let the minimalism of its song titles or the simple, rustic cover art fool you: Autolatry creates a heavily textured, fairly complex cycle of riffing which is born half of the late 90s Swedish melodic black metal sect of Dissection and Dawn, and half of the more progressive, recent tendencies you'll find in Norwegian bands like Enslaved or Immortal over this last decade. A heavily rasped drawl is slightly echoed and thrust above the driving, woven tremolo rhythms and floods of chords that comprise the guitar patterns, while the drums and bass throttle along with some measure of distinction all to themselves. Though I wouldn't say that the actual vocal timbre is particularly unique in this neck of the woods, the production ensures that they slice through the dense dual melodies like a stainless steel knife through a heavily seasoned gourmet dish. There are thundering passages, like the suffix of the opener "Mountain", in which the lyrics drop out and the drums and guitars go at it like desperate refugees attempting to survive the bite of cold and wind, but I think the process works best when the band surges into its warmer, enormous textures.

Best example of this is the opening riff for "Oak", which is relatively straightforward and recalls mid-period Katatonia or Rapture for how much depth is drawn out of a deceptively simple chord pattern, but once they break into that second sequence of notes it's pure, emotionally leaden paradise with the vocals set at the perfect meter. "Snow" has a similar effect, though it's thrust forth at a charge, with some fibrous explosions of melody once the tremolo guitar joins in for the final moment. "Stag" is another particularly strong piece, though it's cast from a more jamming, progressive rock mold with the guitars freaking out, individually panned to give off a very 'live' and organic atmosphere. Still, the dense production values and the musicianship are incredibly consistent throughout the 20 minutes of the EP, and each of the four tunes feels different enough that they don't seem to be blandly reiterating ideas from one to the next.

Granted, this is not the most morbid and threatening of black metal associated acts. Autolatry will not be winning a gold...err, gray ribbon for grimness anytime soon. If you seek only hatred, necroticism and utter desolation, this might not prove so relevant to your interests. Instead, they seem to have developed their lyrical aesthetics towards the thriving, restless wilderness around them, placing them more directly in a spiritual parallel towards bands of an uplifting, pagan metal nature and a pinch of New England folklore. I haven't heard their 2010 full-length recording, The Hill, so I cannot compare the two releases, but I just can't think of anything else in this region of the US which sounds quite like Autolatry. Not every riff is incredibly memorable, and I wouldn't mind a bit more alternation between the warm and cold tones, maybe some acoustic breaks or cleaner vocals for added variation (though this can grow a bit cliche). Otherwise, the future seems bright here. Fans of the influences listed above, or the heavier sides of other American staples like Woods of Ypres or Agalloch would be wise to check this out, especially as its available as a 'Name Your Price' download through the band's website.