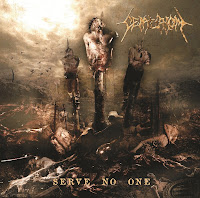 I can't think of a stronger example of anti-Christian symbolism than that of a Roman soldier, so Poland's Centurion is aptly dubbed to accompany their lyrical heresy. One of that scene's lesser known death metal acts, they've been around since the late 90s, releasing one full-length in 2002 (Conquer & Rule), and now a decade later they've finally formulated a proper sophomore. I've never listened to the earlier material, and thus have no foundation for which I might track their development, but Serve No One is a grand example of just how formidable the Polish underground has become, that it can turn out second or even third tier outfits with such competent and muscular fundamentals. Not that I found the album to be all that amazing, but its primary detriment is simply that feeling that it's all been done so often, and often better in the past, that Centurion doesn't quite stand out from the grotesque hordes.

These gentlemen cover a lot of the ground that can be traced straight back to Floridian forebears Morbid Angel and Deicide. The former in that they most often structure their songs around a blasting framework similar to that of Pete Sandoval circa Altars of Madness or Covenant, and the latter due to both the mix of guttural and snarled vocals, and the alternated chugging and bursting mechanics that populate a number of the tracks here. There were a few brief hints of late 80s Pestilence in the octave riffing force of "Thy Portal", but otherwise they stick to the two titans above. This is not unusual for the bands in Poland, of course, and successful groups like Behemoth, Vader and Hate have built off this formula for decades, but unfortunately Centurion doesn't always succeed in crafting the most memorable and athletic of riffs to accompany the unbridled momentum. A few cuts like "Ego Ultimus" are strong throughout, and they do occasionally manage a surprise like the wedge of slamming chords deep in "Sacrilege", palm muted percussion at the end of "Cut the Throat", or the metallic clanging in the breakdown of the titular finale "No One to Serve", but a number of their punishing peers like opener "Total Terror", "Desecration of the Holy Kingdom" or "Under the Black Banner" flew on past my ears without a lot of staying power.

Would have really loved it if they made a greater use of atmosphere throughout the album, as opposed to just using it in specific locales like the eerie, doomed inauguration to "Gateways to Condemnation", but the majority of the material is centered in on serving as a very workmanlike oblation to their hallowed influences. Centurion is not a flashy band, and they don't indulge in a lot of wild lead work, preferring instead to keep the solos brief and/or atmospheric tremolos that ring out like cries from the depths of Hell that their compositions damn them towards. This was not an issue for me, though, since they prove quite adept at blasting and punctual guitars that effortlessly alternate between brash velocity and brutal muted breaks. The album is held to a restrained and respectable 28 minute length, never repetitious or overwrought to the point that it ever becomes boring, but alas it just never seems to surpass the works of its predecessors and ends up well shy of an essential experience. That said, this is by no means a tactless or banal record, and those who really enjoy the similar sounds of Hate, or (death metal) Behemoth with a preference for Deicide's pure and prosaic lyrical irreverence might get a firm, straightforward headbanging out of it.