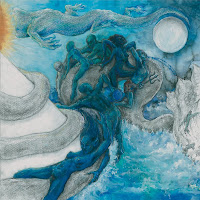 Rahu is yet another outlet involving the prolific Finnish musician Atvar, who also writes and performs in underground staples Circle of Ouroborus, Vordr, Prevalent Resistance and others. With this particular project, he is paired up with drummer and vocalist Kobalt whom is no novice himself, having also played in a few obscure bands like Baptism and Devilry. Like Atvar's latest effort with Venus Star, the artwork here is colorful, unexpected, memorable and frankly stunning, even if it doesn't entirely conform to how the aesthetics of the music affected me. But the music of Rahu is quite something else, and unlike that other project, I felt myself hugely drawn towards its scathing, beautiful charisma like a moth to the backyard zapper.

I am an absolute sucker for a primal black metal band which can make such a refreshing, exorbitant use of melody. Surely the framework for The Quest for the Vajra of Shadows is nothing new: the duo implements the raw, underground despair that acts like Burzum, Darkthrone or Horna rode into infamy. Steady but consistent blasting tempos and salacious rasps create atmosphere highly redolent of the lower budget Scandinavian 90s, but yet Rahu has this heavily refined sensibility for both tremolo picking and bluesy, wailing notes that burn each of its otherwise familiar compositions straight into the memory and demand that the audience repeat the experience. Some of the cuts are relatively straightforward, like the opener "Ordeal of X", which functions on an admittedly traditional foundation of simple tremolo riffing above the surge; but others like "Kalas Bleed for the Sun-Eater" and "The Serpent King" are more subtle and subdued in how their melodies lap at and ultimately devour your conscience.

They don't operate in a monotonous dynamic lockstep either, so you'll hear some more mid paced sequences with double bass kicks and even a spot or two where the percussion will drop out and let the rhythm guitar seethe in its sick sadness. One point where the band might further develop might be the vocals. Kobalt's rasp is acceptably corrosive, but I feel like some cleaner, or even mildly distorted whispers might go a long away alongside the more beautiful guitar lines. As it stands though, I feel like The Quest for the Vajra of Shadows should suit a wide cross section of Finnish black metal fans, whether their poison be the more orthodox and old school (Horna, Satanic Warmaster, Behexen) or the psychedelic and unhinged sounds of something like Oranssi Pazuzu. Hell, the drifting, slicing guitars here might even hold an appeal for fans of blackgaze, but Rahu conditions them within a strictly sinister skeleton. Impressive debut.
Verdict: Win [8.5/10]
Posted by autothrall at 8:29 AM