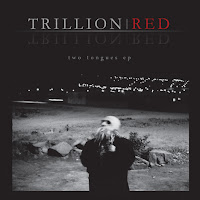 Another eclectic signing to the young BadGod music imprint, Trillion Red have a rather unique sound that, while possible to trace back to a number of precedents, is not the easiest to pin down to any precise precursor. A collaboration hailing from San Francisco, they muster all manner of churning and progressive aggression into a hybrid of sludge and groove metal that feels like Rush and Mastodon jamming out their own psychotic versions of artsy sludge metal fair circa Isis, Sleepytime Gorilla Museum, Jesu and so forth. The result is often spellbinding, and though the Two Tongues EP is rather brief, their formula certainly seems very open-ended as far as its possibilities.

"No Visible Help (Hold Tight!)" builds atmosphere through streaking, dissonant guitars and a tandem of howled and whispered vocals as it drudges into a psychedelic slum and then opens outward again with some interesting percussive clamor and huge tones. I quite enjoyed the rock in the bridge, especially the melody of the echoed vocals, which reminds me of Mastodon on their smoother, calmer cuts. "Forging Two Tongues" teases as a melodic sludge piece, later transcending into an explosion of energy and dying down to a warmer starlit guitar line while the drums thud underneath. But my favorite here was likely "Right Over to the Helm", a dreamy and minimalist intro with cleaner guitar tones that evolves into a trudging epic with lots of ringing, subtle melodies and drifting, Pink Floyd-esque vocal contours.

All told though, it's a pretty interesting way to spend 24 minutes, and though a few of the cuts were on the long side, I never felt they were growing dull. The constant drumming pallet, ambient use of guitars to support the central framework of the heavier riffing, ensure that the atmosphere never dies, and even at its most goofy, the quirky vocal outro "A Reckoning" with its synthetic, brooding effects, it's still strangely jilted and musical. Two Tongues suffers a bit from its brevity, as this is a band which really seeks to drag you under its surreal whims, but this is a common ailment and doesn't detract from its purpose as a solid sampler. The appeal here is wide, from the sludge/doom, art rock and stoner audience to the post-metal fan and everything between, but certainly to fans of Mastodon, Baroness, Cult of Luna and so forth.
Verdict: Win [7.25/10]