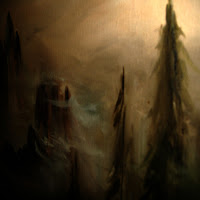 As with the two previous Shroud of Despondency albums I've encountered, Pine drags its listener into an emotional, conceptual journey which spans the realms of thriving nature and a cold, final death. The simple and almost surreal cover hints at obscured, rustic scenery, and the band does a good job of culling this through the evocative songwriting, whereas the 2011 album Dark Meditations in Monastic Seclusion lived up to its cave-like faceplate. But the real strength of this Midwest entity is its songwriting, a rare ability to thread creative melodies and dynamics into their tracks that keep the listener affixed throughout. the experience Rory Heikkila never got the memo that underground black metal be dull, repetitious and entirely redundant, so there's a subtext of hopeful craftmanship here reminiscent of an Agalloch or Cormorant, only I like Shroud's music much more.

The acoustic intro to this thing: "Winged Seed in the Breeze", the first of the four "Wanderlust" instrumentals on the album, is utterly brilliant. Low, brooding effects and crackling leaf sounds in a steady, subdued wind help the plucky clean guitar passage win its way deep into the solemnity of the autumn spirit. It's successors more or less continue the same texture and atmosphere, but each layers in something different: narrative samples, pianos or added guitar effects. They go a long way to break up the heavier tunes and grant the album a consistent center, almost as if they were beckoning the audience with a brief meditative focus before drowning he or she back into the sinister strides of harrowing blasts and the vicious black rasping. Yet, these longing ligaments and lamentations would mean nothing if the meat of the metal wasn't also so effective...

What you'll first notice is just how much effort is placed in the construction of the guitars. Take the first barn burner, "Overshadow" and you'll experience all manner of careening, ascending and descending melodies and dynamic fluctuations where they cycle from blasted, Swedish style melodic death circa Dissection to chugging alongside a raunchy tone with guttural vocals in the bridge, to an almost psychedelic, swirling climax. Don't get too attached to any one aesthetic, because then the next track "New Trees" opens with excellent, surgical death metal riffing and teensy sweeps which inevitably lead to the glorious, mystical lead melodies of its own bridge. No two tunes here are exactly alike, for example "Half Opens Gates" is a melodic black doom epic with loads of atmospheric guitar crescendos, while "Light Words, Dark Graves" is an almost grinding black/death surge. Hell, closer "The Unchaining of an Animal" is pure guitar folk with clean, layered vocals...

Pine might very well have turned into some scattershot assembly of ideas with poor execution, but strangely enough it all seems to come together in this rural tapestry of regrets. The mix of the music is subdued, underground and independent yet maintains the complete clarity of a more professionally budgeted effort. The lyrics are paeans to nature and depression loaded with tasteful, simple prose, almost like a black metal Faulkner, and the ability of the musicians knows no real bounds. I wouldn't say this was perfect, if only because I feel I need to be in a specific mood to immerse myself in its sorrowed boughs, and despite it's many strengths the individual songs are not always the most memorable out there. However, I enjoyed it more than either of their previous full-length efforts, and its talent and vision are indisputable. Fans of the well-liked, aforementioned Agalloch and Cormorant, or Minnesota's Obsequiae, or hell, even the first two Opeth records (Orchid and Morningrise), where they were writing in a more rustic vein with lots of acoustic appeal, should snap this right up.