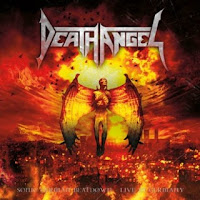 It's sad to me that a live album recorded and released nearly 20 years after a prior such product can fail to live up to it, but that's the case for Death Angel's German live released to help commemorate their successful reunion and commitment to touring throughout the new 21st century (however long into it they will survive). Nuclear Blast hauled this out in two formats, the first an audio CD and the second a three-disc DVD set with the added bonus of an additional pair of live sets and the chance to watch, rather than just listen to their performance, but this review sticks to the core audio disc, which is strikingly average in both execution and excitement level.

Granted, the band were playing here with only 4/5ths of their original lineup, Ted Aquilar having taken over for Gus Pepa for the reunion and The Art of Dying, but I hardly think that's an important factor in just how not-compelling this set feels. The guitars are chunkier than Fall from Grace, for example, but somehow in that translation they seem to have lost a lot of the subtlety and energy of early numbers from the first three albums, which admittedly comprise a fair portion of this gig. Worst of all, Mark Osegueda sounds quite strained, losing a bit of the cut and elegance of his timbre in a song like "Seemingly Endless Time". At times, it almost seems as if he's trying to put more of an aggressive black or death metal rasp on the material, either that or his throat is torn and he's just losing his voice? Certainly on The Art of Dying his delivery is much smoother, but here I'm not just feeling it.

The Sonic German Beatdown starts out innocuously enough with an accented introduction from who I assume was a show promoter, and then they tease us with a warmup riff for a few seconds and transition right into "Seemingly Endless Time". I love this sort of intro, and you can tell the crowd is incredibly happy to get the chance to experience one of their West Coast 80s thrash icons in the flesh, but the intensity really seems to abate over what seems like a muddled, too crunchy performance. As a live gig, this was probably fun enough, but as a live album, I just don't appreciate it on the level of their earlier, now rare recording from Amsterdam. For one thing, I'm just not all that into their newer material. "Thrown to the Wolves", "5 Steps to Freedom", "The Devil Incarnate" and "Thicker Than Blood" are all included from The Art of Dying, and though they're not horrible choices, and fit the present configuration of the band well, they never cull the same frenzied excitement as the old tunes.

Funny enough that an album called 'sonic beatdown' doesn't actually feature that track from 2008's Killing Season (though the second disc of the DVD set version appears to feature a few of the newer tunes), but that is hardly disappointment here, since all I really want are tracks from the first three. To an extent, Death Angel rewards nostalgia with "Voracious Souls", "Mistress of Pain" and "Kill as One" from The Ultra-Violence, but none of these songs sound all that cool due to the wilder bite of the vocals and the thicker chugging. Frolic Through the Park is represented with only "3rd Floor" and "Bored", but the latter doesn't sound quite right, nor do most of the Act III proxies "Ex Tc" or "Disturbing the Peace". "Stagnant" just sounds tired, we didn't need funk metal when this band was fresh out of the creative furnace and we certainly don't need it now...best to consign this one to the dust.

The drums sound decent, the bass thick and juicy enough to matter, and the guitars pretty loud, but the whole performance feels a little disheveled, as if the band was jumping around too much and thus didn't play as tightly as possible. That said, it's not that they royally fuck up anything, it just sounds like what normally happens when a band channels back to their youth and simply does not sound quite the same anymore. We've heard this from nearly every major metal act, and to some level it can be excused, but where Fall From Grace was a decent offering in the live arena, this isn't worth the investment. If you're dead set on its acquisition, go straight for the DVD set and don't look back...which is par for the course for nearly any of these multiple format releases. The full package is the one most of the effort went into, and this feels like nothing more than table scraps.