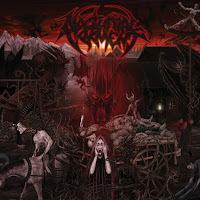 An evolution bridging two decades of absence, Indiana's Nocturnal Torment once took the form an obscure Midwest thrash act called Termination. From there they parted ways, spent about 20 years performing in other projects (the best known of which is likely the war metal battalion Invasion) and now renew their collaboration with a sound decidedly more brutal. It would come as no surprise if you've experienced Invasion records like Berserk Artillery Barrage and Orchestrated Kill Maneuver that these guys are heavily on the old school revival, but it's to their credit that They Come At Night is not just the latest in a string of Incantation knockoffs or Swedish throwbacks aimed at 1992. No, Nocturnal Torment draws upon a wider foundation, and thus their debut overcomes the 'fun but it's been done' classification thanks to the strong dynamics at play.

I'm hearing a lot of Floridian inspiration circa Malevolent Creation, Deicide and other usual suspects, but more interestingly a strong Dutch connection to the formative sounds of Sinister and Pestilence circa Diabolical Summoning, Crossing the Styx, and Consuming Impulse. This manifests not only in the constant, percussive pulverization of the rhythm guitars but also their tendency to rip out these excellent dual surgical lead guitars like the great tremolo sequence in "Forever Eternal Darkness" or that haunting note progression that permeates "Cycle of Life". Where a lot of similarly motivated bands falter in slugging out one familiar riff after another, the nocturnal tormentors ensure that there's always something tantalizing that awaits within the bridge and lead sequences of the songs, and thus it's nigh impossible that any of the material here could ever become boring. Couple this with resonant, brute cookie monster gutturals that evoke a hybrid of early 90s Barney Greenway and Glen Benton's lower register, and a rhythm section who perform with both the technique of Suffocation and the blunt consistency of England's Benediction during their heydays...

...and you've got yourself an irresistible neck breaking formula. However, it's important to note that Nocturnal Torment never seems to be merely paying tribute to the record collections of its constituents. There is more at work on this record than simple nostalgia, and the songwriting hurls itself straight for the jugular with a corpulent, domineering guitar tone that feels as rabid as the old Sunlight sound without coming close to aping it. A lot of the lower strong rhythm riffs draw upon their thrash roots, and some fairly close to the crushing battlefield fortifications that dote the Invasion discography, but in general they never sound 100% like any one other artist. With its dark, unruly production and acrobatic, practiced level of aggression and ability, They Come at Night should see many happy returns for these long-timers. It's not perfect, and not all the riffs or vocal patterns hang forever upon the scaffold of the mind and imagination, but I think it should very well please fans of the latest records from Godless Rising, Abominant, Blaspherian, and the simpler Cianide; or, really, any of the influences I name dropped above.