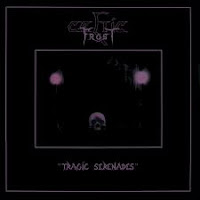 Tragic Serenades was another of those lovely excesses of the 80s which had very little authentic justification for existence other than its commercial advantages. All three of the tracks here had already been released ("Jewel Throne" and "The Usurper" through To Mega Therion; "Return to the Eve" through the Morbid Tales EP), but Tom G. Warrior claims to have wanted to ramp up the production on a number of the tunes and incorporate Martin Ain's bass lines as a replacement for those Dominic Steiner recorded on the full-length. Makes sense, but then, why not just re-record the whole thing? Were the album versions of "Jewel Throne" and "The Usurper" such a legitimate cause for concern? I rather enjoyed them, and to be honest, I don't find these to be much improved...

But hey, it's got a Celtic Frost logo on it. Obscure, minimal, and pretty fascinating cover image. The market for this band was still quite young, and by '86 a lot of folks had yet to hear them, but thrash and speed metal were starting to blow up thanks to bands like Metallica, Anthrax and Slayer. So it would not have surprised me that Tragic Serenades was a first introduction for a number of their flock, and in fact experienced this first hand with a friend who called me over to listen to the 'new' Frost tape, only to then rush home and dub him the entire To Mega Therion since it was obvious that he wasn't getting the 'whole picture' (the selection here lacks some of the important, grandiose, atmospheric French horn stuff on the LP). The fact is, a ton of EPs and singles like this one, some with only the most minor of distinctions and studio tweaks, were unleashed upon a fan base that presumably would buy them for collection purposes or to shell out a few more dollars to their favorite labels and artists. A practice I didn't have a huge problem with at the time, but then...there's a reason why Eyes of Horror retains its value and Tragic Serenades does not.

To be fair, the production here of the album cuts seems even more raw and potent than it was before, and Celtic Frost at their angriest to its day. Ain's bass lines don't differ much in tone, but they feel more spacious and atmospheric and lend themselves just as well to the music as Steiner's. I like his slides and aggression in "Jewel Throne", and if I'm not mistaken it seems a bit more distorted in general than on the album. "The Usurper" comes off a fraction more groovy than the prior incarnation, but I don't really notice a gulf in quality between the two versions due to the bass or enhanced mix. The last track, an alternate studio take on "Return to the Eve" was included to show a lighter hearted side of the band, so you get a lot of hoarser spit and 'hngggs' from Warrior, and Reed St. Mark also adds some vocals with an even gruffer tone that...to be truthful...I wouldn't have minded on a lot more of their early tunes. That said, this incarnation of "Return..." seems mildly goofy in retrospect...

But the fact that it was also included on the re-release of To Mega Therion, and in fact, this whole EP has been retroactively added to subsequent issues of the album, renders it even more obsolete than it was when it first came out. Tragic Serenades is certainly the sort of product that tugs at the heartstrings of a good number of fans, and I can admire its nostalgic appeal, but I just don't see any ultimate purpose for it when I've already got Morbid Tales and To Mega Therion. I never lost any sleep thinking to myself 'hrm, what if Martin Eric Ain had re-recorded the bass parts for these tracks'. Not to downplay the guy's importance in the band's legacy (for better AND worse, down the road) but the full-length wasn't broken, and didn't need fixing. For me, this feels like thinly veiled contractual filler. And the 11 and a half minutes of redundancy and taking the piss here do nothing except occupy that Graveyard of Dusty Cassettes that I've no reason to return to...