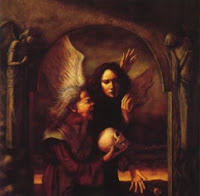 Sign that you're a pretty hot commodity: after just a pair of albums on a semi-underground imprint, and some limited video rotation on MTV's Headbangers Ball, you've got a call from Geffen Fucking Records. They want to sign you. You, a young and able speed/thrash band on the upswing despite a rather underwhelming sophomore full-length, about to transition onto one of the higher profile labels out there, which rarely touches upon this particular niche in metal. Sure, they've worked with Manowar, Zakk Wylde/Pride & Glory, White Zombie and even the Galactic Cowboys (who were hardly a meal ticket), but as for thrash? Nothing else really comes to mind.

So you pass this news on to Restless/Enigma and depart for supposedly greener pastures, but they're not quite ready to let you go just yet. The wheels of commerce still need to be greased, so they slap out a live album recorded in Holland in the summer of '88 during the Frolic Through the Park tour in Europe, and Fall From Grace is born. An album almost impossible to find these days without tapping a collector or auction, one that I've purchased on cassette when it first dropped but never even found on any other format to upgrade. It's too bad, really, because in all fairness, even if Death Angel were not privy to its release or happy with it, Fall From Grace is actually a decent live album which showcases the band at its prime, when things were still on the way up and not on their way out (i.e. post-Act III). I'm honestly a little surprised that the band were doing an hour set by this point, but here it stands, an 11 track performance which does its job well enough, and having seen them myself on the following US tour, it's a pretty accurate portrayal of their set and live energy.

The recording of the set is quite good. Brazen and crisp guitars dominate the mix, though the bass and drums are fully audible and Mark's vocals ring true once you focus in on them (though the beginning of the album sets them a little softer than I'd like). There are a few points in which the chorus vocals feel a little limp, whether it's partially because the backups aren't mic'd loud enough or Osegueda is relying on the crowd and we can't really heard them, I can't really determine. But once you reach the climax in a track like "Why You Do This" its somewhat awkward and Mark seems strained. Otherwise, though, it's a spiffy mix with a lot of momentum to it that sounds nearly as good as live thrash staples like Destruction's Live Without Sense. I also have no complaint about the set-list, because it draws from the early albums equally: "Evil Priest", "Mistress of Pain", "Voracious Souls", "Kill as One" and "Final Death" from The Ultra-Violence; "Why You Do This", "Road Mutants", "Confused", "Bored", "Guilty of Innocence" and "Shores of Sin" from Frolic.

Not a bad selection at all, and I enjoyed experiencing almost the whole set, even "Bored" which is not a song I was all that hyped over despite it likely getting the Californian band their major label deal. In fact, I probably enjoy listening to this more than Frolic Through the Park, so if you've got the chance to get your mitts on this in either tape or CD format (not sure if there was an LP release here in the states, though there's a Dutch vinyl version) at a good price, and you have no objection to 80s thrash recordings, then it's worth a listen. If you're into Death Angel's later material more than the first album, then you should hang your head in sham....I mean, you might get more out of the Sonic Beatdown album/DVD which was recorded in Germany and has a wider selection of songs in the set from both periods in their career. Nevertheless, Fall From Grace at least delivers what it promises, even if Enigma couldn't score the band's logo for the cover painting. The crowd sounds happy, the set involves most of their classics, and aside from a few shitty vocal lines it certainly reeks of 'you should've been there'.
Verdict: Win [7/10]