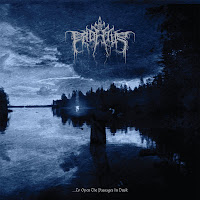 Finland has long been the 'hotbed' for funereal doom, from seminal and often imitated 90s works like Skepticism's Stormcrowfleet or Thergothon's Stream from the Heavens to more contemporary mutations circa Shape of Despair, Wormphlegm and so forth. Entering this gauntlet of sorrows is Profetus, a younger band with a few years of history, which doesn't so much seek to refine this niche as it does to present it in a tidy, spacious and haunting environment that is admittedly effective despite its tendency to drag on. Having no real exposure to their earlier Coronation of the Black Sun, this is my first waltz with their brand of sullen lamentation, but I've come away feeling a proper enough air of snuffed illumination and gaping despair that I feel it's worth chasing down if you're fond of the stuff.

Comparatively, I'd say that Profetus follows the framework established by its countrymen in the mid-90s as far as the riffing itself. Yet the production here trades out that oblique, raw dirt of its predecessors for a cleaner, rustic aesthetic streamlined with its lyrics. Where some past funeral doom recordings have felt like they seeped at your spirit from forsaken crypts or empty castle walls, ...To Open the Passages in Dusk seems to skirt the forest canopy at dusk, or sail across the lake waters on wings of precipitous regret. The drawn out gutturals drift alongside the dirge-like majesty of the drudging chords, and the organ sounds are omnipresent, proving just as crucial to the atmosphere as any other instrument. Passages of mournful, quiet clean vocals or whispers are woven through the hour long elegy, especially the opener "When Autumn Cries a Fiery Canticle" in which we get a broad taste for the band's glorious, snail paced riffing structures which lurch along with all the grim certainty of a Sunday afternoon at the cemetery.

If I've got any serious complaint, it's the same that I could make for many albums of this type: a distinct lack of variation in the tracks which asserts that a listener really be in the mood to invest the full hour into its ineffable sadness. At several points ("The Watchers Dusk") the languid beat of the drum is sheathed to let the aura of mourning ring out into the twilight, but the mood and individual style of the guitar progressions does not differ enough that you ever feel a sense of the unexpected cropping up into the meat of the material; and when a track is passing the 17 minute mark, as in "The Shoreless", I really seek a sense of diversion somewhere in its depths. That said, the four quadrants of this sophomore are quite consistent, to the point that it's impossible to favor one over another. No bad to take with the good, or vice versa, just 58 minutes of sinking dreams and strangled hopes, all drowned in the record's commodious, depressing clarity. Tissues not included.