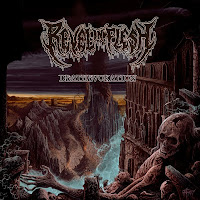 Revel in Flesh face an immediate uphill battle in that they perform the same brand of 90s Swedeath worship that's so widespread and prevalent in recent years. But despite that, I was eager to check out their full-length debut Deathevokation, the reason being that a few of these Germans were once counted among the ranks of the great Apophis, a severely underrated band who performed a memorable, melodic and old school take on the Egyptology worship that Nile later made huge waves with. I still spin Heliopolis to this day, and while granted I'm not clear as to whether the alumni here played on that record, it's still a cause for some excitement.

Yeah, you already know what this album is going to sound like from my first sentence, or from the fact that the band's name is drawn from a great Entombed cut from their 1990 debut, Left Hand Path. This is an utter throwback to the days of that record, Clandestine, Dismember's first two efforts and also the earlier Grave sound, and Revel in Flesh make no apologies for the absolute lack of anything novel or frankly, interesting. It's all about the logo, the cover art, and paying tribute to an age which was obviously quite important to the members as they first exploring the possibilities of extreme metal. Even though the musicians have an already established pedigree through Apophis, Immortal Rites and Dawn of Dreams, I didn't feel a lot of influence coming through from any of those acts, more of a straight burn to the Sunlight dominated guitar tone and thuggish, driving tremolo lines and d-beat punk undercurrent that transformed the aesthetic into such a worldwide phenomenon.

That said, where other new acts like Feral gravitate towards the whole Wolverine Blues death & roll riffing, Deathevokation travels along the axis of the purely brutal. The vocals here are a bit more blunt and gory, than say a L-G Petrov, and you can tell they've been listening to their Grave or Seance records just as much as if not more than Left Hand Path, because the riffs get a bit more violent and take their queues from the late 80s Floridian forefathers as often as they do from the punk and hardcore foundation that went into Nihilist or Carnage. There's a fair share of variation, from the multitude of mid-paced churners to the slower breakdown grooves, and they often lay into some appreciable, atmospheric leads as in "Wings of Death" which slice out above the fray with belligerent, warlike progressions reminiscent of Bolt Thrower. The tone of the guitars is bright and bludgeoning, the vocals often pair up their guttural timbre with a sidereal snarler, and they perform with the reliability of a well tended brick wall.

Unfortunately, there was another brick wall for me here, and that's simply that I've heard the style done so damned often in the past 20+ years that I didn't find the album able to hold my attention for long periods of time. There have been bands lately like Tormented, Miasmal and the aforementioned Feral that have overcome this pervasive sense of familiarity with incredible atmospheres or riff structures that can often rival the original sources, but even in its most exciting pieces like the crushing, moody "Iron Coffin", Deathevokation never really hit me with a 'wow' factor, just more of the same. That said, I can't fault the band for wanting to live out their influences, and this is far from a bad record. The execution and ability here are well versed and tight, the production overpowering and bound to burst from your speakers like cannon shells, and those heavily enamored with the broadside artillery of an Entrails, Bloodbath or Hail of Bullets, are not likely to be disappointed.