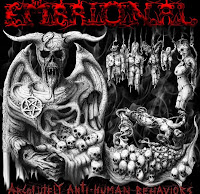 I remember Embrional's debut Cusp of Evil from a few years back in 2008. A decent mesh of new and old school influences, with a clear penchant for weaving a good number of instrumentals in through the more brutal fare. The Polish quartet has now returned for a stronger followup in Absolutely Anti-Human Behaviors, which seems more or less like they sent their earlier compositions off to a refinery and then emerged with more memorable results. The cover art here makes this look like a total nostalgia trip, perhaps to some approximation of a black and death metal hybrid, but what actually manifests on the album itself is a solid variety of surgical, semi-technical riffing and influences scattered between the old Dutch and Florida scenes with perhaps a touch of Immolation and early Vader. Ultimately, this sophomore proves that Embrional is well deserving of your attention, if at times the songs are somewhat inconsistent in overall value.

Generally, bands at this level of proficiency and intensity tend towards a more modern polish in the studio, but I must credit Absolutely Anti-Human Behaviors for its more earthen, natural and raw tone. Not void of reasonable clarity, mind you, but the rather organic landscape plays well to the intense skills of the drummer, and the guitars seem to pluck out your spine one vertebrae at a time whether they're crashing along to some dissonance tremolo picked sequence or erupting into this fibrous, creepy melodies above which the gutturals drone on like the ivy encrusted walls of some forsaken tomb being pried ajar (as in the opener, "Possessed by Evil") by corpse robbers. I love the surgical barrage invested into the riffing progressions, alternated between febrile muted mechanical thrashing and surges of old school, abyssal evil. What's more, several of the lead sequences here are incredible, like the early bridge in "The Last Step Into Nothingness" or the fell majesties that permeate "Bestial Torture". Did I mention the drums? Because this guy, Camillvs, is assuredly a beast who must have made some pact with diabolic forces to hit as hard and often as he can...

There are only two instrumentals present, far less than the debut, but both are quite expertly handled. "Necropolis" is chalk full of sensible leads over an old school attack of muted tremolo progressions, while "Beyond the Abyss" is a tasteful, resonant acoustic piece. Neither is quite as brutal or punishing as the rest of the album, but they make for an appreciation 'break in the action' (though the latter might have been placed a little later on the track list for a greater balance). Otherwise, I've got no tangible complaints. The vocals are pretty typical gutturals, but the way they echo alongside the thinner, crisp guitars makes for a lavish, menacing contrast that adds a malevolent breadth to the atmosphere. Once in a while the ruddiness of the guitar texture reminds me Australian oddities Portal, only far more controlled and accessible. I would say that Absolutely Anti-Human Behaviors is well poised to earn the band a wide following: the time is right to strike at this old school, death metal nostalgia, yet Embrional do it without being stupid or a direct derivative of any one sound. Wretched, brutal, and archaic, yet somehow still forward moving and thinking.