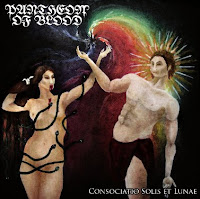 Finland is no stranger to the more primordial side of the black metal spectrum, with scores of its prominent artists helping keep alive (or dead, depending on your perspective) the grim savagery of the Old Guard of Scandinavia, newsprint-toned progenitors of evil that are still wildly worshiped to this day. Into this maelstrom of morbidity is thrust Pantheon of Blood, an act formed in 2009, which attempts, successfully I might add, to fuse the primal aesthetics of its parent genre into a broader mysticism that carries it well beyond the reach of mere, predictable derivation. All the while, the EP remains loyal to its blackened roots via the threat generated through its crude, grimy guitar tone and desperate, spacious desolation of the vocals, which are surprisingly manifest in more of a guttural timbre than the rasp or snarl you might normally expect.

As the title implies, Consociatio Solis et Lunae provides a metaphysical examination of the lush, classics concepts of Sun & Moon through the contrasted context of barbaric rhythms guitars, brutal vocals and existential, image-rich lyricism that champions a mythological perspective on the poles of light and darkness. A wonderfully packaged gatefold 7" through Glorious North Productions out of the UK, its complete with colorful paintings of a, surreal, almost psychedelic artwork that stirs both the mind and loins of the beholder. As for its production, the vocals of Boreas prove most resilient, haunted and echoing guttural drudgery that echoes as widely across the fuzz of the retching chords as it its titular celestial bodies span the solar system. Drums are tinny but supportive, bass seems almost an obsequious afterthought, but the real focus is on the domineering of its poignant prose and the callow churning of the guitars which eschew any real notion of complexity in order to promote an antediluvian hypnosis.

It's a little hard to compare Pantheon of Blood to any one of their peers, because where I might the generally slower riffing structures similar to something like Horna, Beherit, Warloghe or Baptism, the addition of the more ominous vocals and the implementation of cackling laughter and soaring, abyssal chants creates this refreshing level of hostility that breeds some distinction and individuality. Clean guitars are incorporated in the first track, "Overflowing Manifestation", while its more doom-laden companion "The Crimson Empress of Night" features a stronger melodic undercurrent and even a bluesy lead (courtesy of Shu-Ananda from the grisly Saturnian Mist and Charnel Winds). I found the latter mildly more impressive, with its slower build of harrowing guitars and the meter of the vocals to the skeleton of the rhythm, but both provided a corpulent, oft frightening tribute to their illuminated subjects.

If there could be any complaint leveled against the music, it's simply that the structure of the guitars doesn't quite match the creative expanse and atmosphere of the vocals or the chants. There is little subtlety or nuance, just a slough of familiar texture and ideas that have manifest through hundreds if not thousands of similar recordings. That said, the dressing slathered upon them through the vocals of Boreas, and the incredibly vulgar mixdown of the music lends it a lot of character that its riffing architecture might otherwise have lacked. Pantheon of Blood broods and elevates with an effective, passionate carnage that will certainly suit fans of like-minded black metal acts, or even those enamored of the more cavernous climes of the current death metal retrospective. The excellent packaging and atmosphere of the music are worth experiencing, though I feel the Finns' music will be better suited to an extended, full-length evolution, with more substance explored through the guitars, and a deeper immersion conjured through a greater duration.