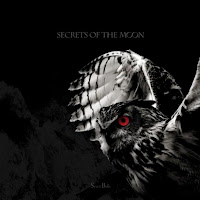 Secrets of the Moon has always struck me as a rather interesting band, considered one of the artsier black metal exports among the German scene and yet strangely accessible. Their writing seems to hone in on simplistic, tried and trued structures albeit with the level of atmosphere dialed up to ten, and they work best when unleashing slower to mid-paced passages with a crushing resonance. Add to this the curious lack of a viable logo, and the strangely hypnotic covers they use for their albums, often centered around simple photos or objects (last time a black apple, this time an owl), and you've this unique and refreshing approach which seems to strip the black metal genre down to its components and then restructure itself from the primordial muck.

In the past, I've found that their albums marked a rather steady evolution, no two seeming quite alike in scope or tone, but to be honest Seven Bells is not a far hoot from its 2009 Privilegivm, which I have previously both reviewed and enjoyed. A mix of harsh and cleaner, textured vocals are cast out above the driving, churling grooves and mutes that represent the majority of the rhythm guitars, and the band with occasionally explode into a faster brand of polished black in the Scandinavian traditions of Sweden or Norway, as they do with the titular opening track. Add bluesy guitar leads, tolling bells (no surprise), tribal drumming with heavy toms, and you've got an easy intro to darker metal that doesn't seem nearly so volatile as many in the genre, whether that be black or doom. Yet to be honest, I didn't find Seven Bells to be all that interesting when I was outside its grasp. No longing to return under its measured, raptor wingspan. Tunes like "Goathead" and "Nyx" flow along with ominous, doomed grace, the latter even segueing into a tranquil ambient finale, but there are never any riffs that emerge and delight from the overall superstructure...

That said, I cannot fault Secrets for their consistency or pacing here. They know how to build a track up for 7 or even 11 minutes and keep you immersed in where it's going, even if you do not find most of the constituent note progressions all that fulfilling. Perhaps my favorite track on the album was "Worship", as I enjoyed how the tormented ritualistic vocals and ringing melodies just erupts into this hammering juggernaut and then subsides for a ghostlike melody, but it's not at all unpleasant to experience Seven Bells in its wholeness, and the chiming of its namesake does persist throughout the playlist in a conceptual procession of funereal shadows. A decent drift off into the eveningscape, well suited to fans of simpler, crushing works like Triptykon's debut Eparistera Daimones or Celtic Frost's Monotheist. Only change up the vocals, add some bells, and chop off a few of the grooves. Dense, but not impenetrable, nocturnal musings. The clean catharsis of the pendulum in swing.