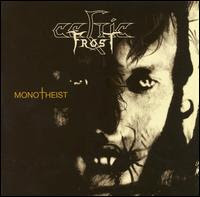 After experiencing their Prototype recording earlier in the 21st century, I had no hope that Celtic Frost would ever be returning to the level of artistry and quality that they once reached through their mid-80s albums To Mega Therion and Into the Pandemonium. It had become clear that 'creativity' wasn't an issue, since Warrior was experimenting with industrial/electronics, and even awful hip hop influences, but it felt wholly misguided. Imagine the surprise then, when just a few years later, after a lot of effort and hard work, the Swiss idols would release another heavy album to great praise, with worldwide distribution through Century Media. Arguably, this was the Celtic Frost record fans had been waiting on for nearly 20 years, but its uncompromising, massive sound was also welcoming towards those decades of newer fans who came up on death and black metal, extremities who in part owe their existence to this band's very legacy.

Unfortunately, I feel like the huge production and overwhelming grooves on the album have gone a long way towards its popularity, and less concern seems to be placed upon the actual construction of the riffing or enduring nature of the tracks. Don't mistake me for someone who hates the album, because after a gulf of 10 years, Monotheist was a breath of relief that the band had stopped fucking around. I like it alright, and listen to it once in a great while, but there is no chance in hell that it's quite so great as many would seem to believe. Greatest comeback ever? Work of genius? Absolutely not. Celtic Frost's primal riffing was a boon in the 80s, a clever antithesis to the increasing complexity of the thrash and speed metal scenes, but there in 2006 a lot of the guitar patterns felt irritably derived, and I'm rather surprised that it took Warrior, Ain and their new band mates '4 years of songwriting' to arrive at what a group of 'core kids jamming on the corner of my street could have come up with in 15 minutes in an afternoon session.

Of course, Celtic Frost are more or less cashing in debts on something they had a heavy hand in first creating. A lot of the palm muted chugging that filtered on down through thrash, hardcore and groove metal scenes first originated with bands like this who played them with muscle, and so if Monotheist often reminds me of younger acts that broke out through the 90s, then they're automatically forgiven. Some of the open, groovier low end open note rhythms in tracks like "Ground", "Progeny" or "Ain Elohim" remind me of the first two albums from New Yorkers Life of Agony due to that voluminous guitar tone. More surprising, the whole album reeks of a modern doom metal effort more than any other specific genre. Granted, works like Morbid Tales and To Mega Therion had a huge impact on a lot of the death/doom that originated from England like Paradise Lost and My Dying Bride, almost as much as Sabbath, but this is the first Celtic Frost record that I would classify as predominantly doom, with a hint of their formative, thrashing fervor. Not a bad thing, per se, but it certainly plays into how one experiences the album.

For any who might have worried that Frost had lost its 'worldliness', fear not. Touches of Into the Pandemonium's eclectic nature are retained here, even if they're in the minority. Examples include "Incantation Against", a Mesopotamian inspired guest vocal piece by featuring Simone Vollenweider's gorgeous voice against a brooding, monotonous male choir backdrop. "Os Abysmi Vel Daath" features alternations of crushing, simplistic riffs with some dark noise passages; while "A Dying God Coming Into Human Flesh" opens with brooding, dark clean guitars and desolate crooning by the man himself. There are also a number of guest slots throughout the album like Satyr and Peter Tägtgren lending vocals for the 14 minute slog "Synagoga Satanae", or Ravn from 1349 appearing on "Temple of Depression". Considering how many death and black metal bands pay tribute to Frost on a normal basis, it makes a lot of sense that that various personas would have been lining up to contribute. In general, though, Monotheist is far less dynamically ranged than Into the Pandemonium, perhaps even less than To Mega Therion: as a whole it congeals into a very consistent, depressing experience.

There are two primary suspects holding me back from appreciating this comeback as fully as some of my peers. First: the guitar riffs. I like that they're crude and loud, almost as if Warrior was reaching back into the primordial ooze from which he first shaped Hellhammer for a new strain of pummeling slime to unleash upon his followers. But the actual patterns of notes are so often treacherously dull and uninspired, 'first thing that came to mind' progressions that might thrill people attuned solely to the leaden distortion and Franco Sesca's concrete foundation, but seem to lack all the charisma of their old songs. Whereas "Return to the Eve" or "Circle of the Tyrants" have survived for 20+ years in my memory, feeling fresh even today, something like "Ground" or "Obscured" is almost impossible for me to recall even a week later. The guitars were such a prominent feature of their classics, but here they might just belong to any other run of the mill doom metal band of Sabbath lineage. They are no way even nearing impressive, and this is a fault I also found with the subsequent Triptykon debut, which has an even more brazen and 'bigger budget' production sound.

Since the guitars don't really stand out other than their tone, they rely all too heavily on the pacing of the beats and the lyrical narrative to fuel the album, and this leads me to my other major complaint against Monotheist: the lyrics very often suck from the same bone that they did with the Prototype demo. Lots of 'I am I am I am I am' which appears in about half the songs on the frickin' album, and far too much repetition of lines like 'Oh God, why have you forsaken me?' ("Ground") or 'I am a dying God, coming into human flesh' (guess the track), 'I deny my own desire' ("Os Abysmi Vel Daath"), etc. I realize that the actual purpose behind the lyrics is to provide a dark, hypnotic and tormented mantra alongside the simplicity of the riffing, but with so little to enjoy in the guitars themselves, I found that the lyric patterns and choruses seemed lazy and forgettable, as if partially inspired by a lot of miserable groove and nu-metal acts throughout the 90s who had the poetic eloquence of a manhole cover. It's not that what is being said is not 'important', but it's just not being said by the most interesting means.

Tom, on the other hand sounds pretty damn good. He had clearly aged, but his gruff bark has lost little power over the years. It even seems a little more daunting and acidic among the concrete chords that carve out "My Domain of Decay". His froglike gutterglam whines circa Cold Lake have been supplanted by a cleaner, wavering Gothic tone which, while not as charismatic as his lines on "Mesmerized" or "Babylon Fell" from Into the Pandemonium, is acceptable enough on a depressive, atmospheric droning cut like "Obscured" (on which he's joined by female vocals to provide what must be the catchiest single passage on the whole of the album). The new rhythm section seems to gel together quite nicely, granted they're not doing so much outside of accenting the guitars, but there's a more tribal nature to Sesa's performance than I can recall from Reed St. Mark or Stephen Priestly. Ain contributes backing vocals and writing, and the new guitarist Erol Unala (who had been with them since Prototype) is a fitting match for Warrior.

In the end, Monotheist overcomes my sizable gripes if only because it still provides an alluring atmosphere in which the listener can drown him or herself for 70 minutes, and has a few aural climaxes scattered about its cratered, sorrow-scarred surface that compensate for its ruddy, often overbearingly and tactless gloom. It's a good example of a cult act adapting itself to a modern environment without losing all of its identity, though as we know it was not exactly the most seamless of transitions (listen to the two prior demos, or the 'glam' phase). The cover image is great not only because it sticks with you, but it also matches the haunted aesthetics of the music. That aside, this is not an album I want to render down to its individual components very often, or I'll become too annoyed with the lackluster architecture of the riffs and the general predictability of the songs as they stray forth into the apocryphal dusk.