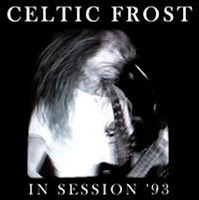 One might expect an influential, iconic band of Celtic Frost's stature to rough out the 90s with considerable dignity, but if the Nemesis and Power demo, recorded to prod some post-Noise label interest, is any indicator, then the Swiss folded at exactly the right time to avoid humiliating themselves on a level Cold Lake could only have dreamed of. The content of this demo is hands down the most embarrassing and pedestrian songwriting I've ever heard from the band, making their glamorous 1988 faux pas seem glorious by comparison, and Hellhammer seem lucratively sophisticated. Clearly Tom and his troops had run full out of steam, and at best the material here offers a few half-assed special effects that themselves would have required heavy development to pass muster.

Oh, I get that it's a 'demo' recording. I get it, believe me. It was never meant to greet the ears of wriggling and opinionated scum such as myself, but let's be blunt: if the best thing your demo has going for it is a semi-industrial, dorky cover of an obvious Carmina Burana chorus, you're in a serious spot of trouble. I mean, it's not as if Celtic Frost was some heinously unknown garage band. They might have yet to become such cult figures as they are in the 21st century, but even at this point they'd already released a pair of marvelous albums and another pair of classic EPs going back almost a decade before this. Even if they were riding the misfortune of a few dud albums, record label troubles and lineup changes, the songwriting here is uninteresting, dull, and often inexcusably so. This was more or less the same lineup as Vanity/Nemesis, only with the bonus of having Reed St. Mark back on the drums, so for the songs to be THIS bad I can only surmise that: a) they were written in 15 minutes while they were showering and shaving, or b) Tom Warrior was abducted by a thrash band of 13-year olds down the street and forced to add his earnest, froglike voice to their recording. I'll go on and rule out substance abuse, because frankly, this is just not that inspired...

I realize that Celtic Frost was never some bastion of riffing technicality, but their simplified palm mutes and groove rhythms were generally so well conceived that they compensated via their raw barbarity. Here, the guitars seem like the 'my first thrash riff' collection of some insipid teenager with two weeks training, only the kid in question would never have presumed that they might make for decent songs capable of generating interest. "Devil and the Flesh", "The Man Who Would Weep", "Primeval Rapture" and the 'untitled' track, "Under Apollyon's Sun" (which also appeared on the Parched With Thirst Am I and Dying compilation) all contain some of the least impressive muted noted progressions I have heard in my life, to the point that they make the infant nu- and groove-metal acts of this period seem like skilled composers. The drums are pretty simplistic, without much of the blunt force trauma Mark was meting out on the earlier recordings, and the bass is so antagonistically pathetic that it pretty much copies the worthless guitar lines.

There is still an undercurrent of eccentricity here in the choice of female vocals for "Pearl of Love" (which also featured the origin of a Monotheist riff), the strange vocal filter in "Primeval Rapture" which occasionally feels like Mustaine snarling, or the aforementioned industrialized intermission with its chants and choirs and meaty beats, but when rubbed against such a sodden and lamentable collection of riffs as, say "Icons Alive", any sense of fascination and wonder is immediately depleted. And, really, after hearing Into the Pandemonium, how could any of this seem even remotely exotic or avant-garde. Tom's vocals continue to strafe the border between the more aggressive grunts of his past and the febrile whining of Cold Lake, and are not once impressive, but the presence of such treacherously prosaic guitars overshadows any of the agony and regret they might otherwise impose...

I cant chide the band too hard, because obviously they were well cognizant of the fact that this material wasn't going to get them anywhere. Yet the very fact that it exists in even the most amateur, covert form is sad indeed, more evidence of an 80s titan falling to the wayside. At least Celtic Frost didn't attempt to 'keep up with the times' by mutating into an all out alt rock, grunge, rap or techno industrial project, right?