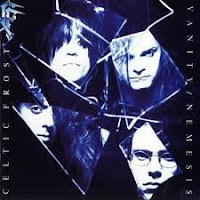 You'll never catch me tripping over myself with ardor for the fourth Celtic Frost full-length Vanity/Nemesis, but at the very least it served as a redress or re-assessment of the tragically flawed 1988 flop Cold Lake. Shortly after that record was released, founder and vocalist Warrior performed a bit of 'housecleaning' by sending Oliver Amberg on his merry way, presumably for the betterment of all. He retained the services of drummer Stephen Priestly and guitarist Curt Victor Bryant (never trust a guy with three first names!), and also got Martin Ain involved again with the songwriting, though he only performs bass on "The Hearth Beneath" and contributes a few of the backing vocals throughout. A third guitarist, Ron Marks was used for session recording, and Bryant and Warrior also performed some of the bass lines, so there seemed like a real sense of collaboration and unity to the record, most of its constituents involved in multiple roles.

Extraneous elements like shitty hip hop intros and glam lyricism might have been cast to the wayside here, but Vanity/Nemesis certainly preserves a few of Cold Lake's aesthetics. The band's image hadn't changed a great deal, for one, and Tom's use of the whining, frog-like vocal is still manifest on a number of the compositions. Priestly's drums are still as pop-rocky as they were on the previous album, and in truth the snare seems even tidier, polished sounding to the point that it comes off a bit sterile. Frost was not about to relapse back to the double kick beats Reed St. Mark was fond of, but Stephen is otherwise up to the task. Female vocals are featured even more prominently, from the seductive whispers of "The Heart Beneath" to the more soulful style in "Wings of Solitude" which recounts "I Won't Dance (The Elders Orient)" from Into the Pandemonium, but here they seem to assimilate themselves far more assertively alongside Warrior and the heavier tone of the riffs...

And there is where the primary difference lies, the foremost reason that Vanity/Nemesis hasn't evoked such sour grapes as its predecessor, and sustains respect from many Frost fanatics even today. The heavier, chugging guitars, while not necessarily any more complex than Cold Lake's harder hitters like "Downtown Hanoi" or "Roses Without Thorns", carry a more tangible emotive power that resonates down through the years with a mystique akin to Into the Pandemonium, if glazed in the muscle enhancement of To Mega Therion. I can't be the only one who feels that this album is still a strange bastardization of glam/hard rock and thrash aesthetics, but there is a mightier furor to the chugging elements in tracks like "The Heart Beneath", "The Name of the Bride" and "Nemesis" that makes it all the more to take seriously. Hell, a few of the cuts like the ill-titled "A Kiss or a Whisper" resurrect the punkish panache that thrived on their earlier PE Morbid Tales, and here Priestly lets the double bass rip.

Mid-paced thrashing ("The Restless Seas", "Nemesis") is where this album seems most effective, and Frost resumes the throne of palm muted groove momentum without leaving behind the eros, eloquence and philosophical rambling of their lyrical matter. Acoustics are teased here, beneath the eaves of "Wings of Solitude", or just beyond the throwback "Into the Crypts of Rays" intro of "Nemesis", and they glint with appropriate sorrow, the latter dowsed in a bluesy if forgettable lead. A few tunes seem a little strange and dorky, like the hilariously named "Phallic Tantrum" with its goofy, happy verse thrashing and pinched, whiny Warrior pitch. "Vanity" and the covers of David Bowie's "Heroes" and Bryan Ferry's "This Island Earth" also seem a tad on the light side for Celtic Frost. Don't get me wrong, it was interesting to hear their muscled alterations to the source material, but they're hardly evocative of the crushing nightmares that so memorably speckled the band's morbid past.

I will say that the first chunk of the album, specifically the first four songs, are very well handled and even exclusive of the rest of Vanity/Nemesis, they surpass Cold Lake with ease. The open chords, grooves and sexy whispers that permeate "The Heart Beneath" all ramp up to a dirty but effective lead, and the whole things sounds quite damned heavy despite the polish. "Wine in My Hand (Third from the Sun)" was the first 'single', given its own EP and a rather lame, largely rock star video treatment; but the song is quite cool, especially the thick verse riffing, and the chorus in which the vocals are affixed to the percussive, escalated wail of the guitar. Tom sounds a lot heavier here, returning to the harder bark he implemented on Dethroned Emperor or To Mega Therion. "Wings of Solitude" chugs along with confidence until the acoustic break, and I love where it opens back up to the huge chords and soulfully backed 'beauty and the beast' chorus. "The Name of My Bride" might occasionally sound a whole lot like a Frost take on Megadeth's "In My Darkest Hour", thanks to the chord progression in the verses, but it's still rock solid throughout, with a nice lead.

Ultimately, though, the album lacks so much of the novel, poignant menace of To Mega Therion or the breathtaking exoticism of Into the Pandemonium that it never quite launches itself to that same plane of immortality. In truth, it's more like an edit of the Cold Lake aesthetics which takes into consideration so much of the critique of that album into an account and then executes with a far more appealing savvy. Gone are the incredibly cheesy lyrics of a "Dance Sleazy" or "Little Velvet", replaced with the more apocryphal rantings of their earlier 80s fare; yet there's only a thin line which separates the pair musically. That said, Vanity/Nemesis is a vast improvement, a cognizant rebuttal to the faux pas of its predecessor that holds up a lot more strongly through the ensuing decades. Not so good that I feel often compelled to revisit it, but engaging enough to break out once in a blue moon. Ironic, then, that it would be the last 'official' record before the shit hit the fan...
Verdict: Win [7/10] (fallen shrine of mutated sighs)