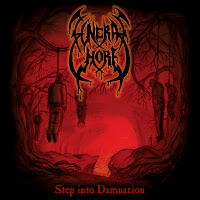 Step Into Damnation presents another convincing argument that not all throwback death metal must prescribe to the tenets established by Entombed or Incantation in the 90s, that there are a wealth of other sources to tap for inspiration. While I certainly can't claim this Dutch band has no understanding of those sounds, as they'll once in a while bust out a d-beat/punk patterned riffing sequence as in the track "Obidience", I was getting more of a flashback towards carnal pioneers and countrymen Asphyx and Acrostichon, or a bit of Bolt Thrower in the warlike double bass battering, all built upon the standards set by Floridian forebears Xecutioner/Obituary or Death in the late 80s.

Funeral Whore keeps the pace varied and the rhythm guitar infantry well balanced with brief but effective, atmospheric leads which really open up their sound to something broader, and I almost wish they had incorporated more melodies since the combination of the two extremes instantly seems more attractive. For the most part, though, they slog along with simplistic and familiar, if not too derivative grooves and down tuned chugging that any fan of formative death metal (both sides of the Atlantic) will certainly recognize in flavor, and either appreciate for its primordial honesty or rue for its redundant nature. I loved the breadth of the bass tone, best felt in those little grooves like the bridge of "El Salvador Death Squad", but found in general that it simply followed the guitar line a bit much. Vocalist Roy has a good, resonant guttural pitch well matched to this niche, reminiscent of Karl Willetts, Corinne van der Brand or Martin van Drunen, but it's not all that dynamic or something we haven't heard a lot of in the past.

In all, though, Step Into Damnation balances itself well enough that despite any 'been there done that' misgivings it still does its job effectively. All the songs are kept within the 3-4 minute range, built off a dependable, drudging architecture which ensures that individual riffs never stick around for an excess of repetitions. The use of the leads and also the intro horror samples from staples like Friday the 13th and Phantasm II help lubricate the album's chassis of brutality with appropriate viscera, and there is no denying the sincere, bludgeoning guitar tone and the sheer, doomed consistency manifest through the corpulent production. Ultimately, after several spins I was not able to form a strong bond to the music, but it's not without a few decent ideas or some genuine, headbanging moments, and fans of its direct influences, or other old school group active in the new millenia like Texans War Master or Pennsylvanians Funerus might gets some good mileage out of this album.