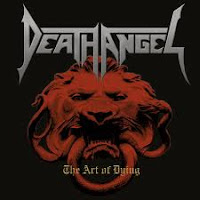 While I'm tempted to hypothesize over what might have manifest if Death Angel hadn't suffered the traumatic injury that put their career on hold post-Act III, the bare fact is that their music was enduring the process of diminishing returns since the debut. And if you've ever had the misfortune of experiencing the pair of incredibly miserable rock focused albums they released as The Organization (without front man Mark Osegueda), or the slightly less offensive but still mediocre Swarm album Beyond the End, you might have come to the same conclusion I did: that even if their career had persisted into the mid 90s, very little good might have come from it. Death Angel nu-metal albums? I would not have been surprised...that slight deviation towards pop rock commercialism with Act III did not exactly tease me towards promising things to come.

When The Art of Dying did finally arrive, 14 years after its predecessor, I can recall a lot of cautious anticipation from fans who were into the band in the 80s. After all, these guys wrote The Ultra-Violence. They put out that cool video for "Bored", dude. If anyone deserves another shot at the top, it was Death Angel. Yet, with so many of these reformed thrash icons to release new material in the 'oughts, like Celtic Frost's Monotheist in 2006 or Exodus' Tempo of the Damned in 2004, I found that at best, the bands' new material was merely a shadow of their former glories, updated into the modern milieu with contemporary production standards, but failing to create those same instantly memorable songs that imprint themselves immediately. To some degree, age and nostalgia might play into such a reaction, sure, but in all honesty I was instantly hooked by The Ultra-Violence. I am still, to this day, instantly drawn to some fraction of new metal albums I encounter, whether they be the works of veterans OR newcomers. The Art of Dying, unfortunately, did not win me over in 2004 and it still hasn't...

But I don't want to mislead anyone into thinking that it's an entirely worthless, shabby effort. At its best, The Art of Dying is a competent, modernized take on the speed/thrash metal that the band were writing for the first two albums. A few of the pieces sound like Death Angel should sound today if we were using The Ultra-Violence and Frolic Through the Park as its control group. But once again, there are quite a few stylistic departures from the roots, like "Famine" which sounds more like something that would happen if Mark Osegueda had been chosen to front Alice in Chains; or "Land of Blood" which honestly sounds like one of the more aggressive Bad Religion songs sans Brett's peppy melodic vocal; "Word to the Wise", another iffy power ballad type rocker that was clearly meant to channel some of that "A Room With a View" magic; "Never Me", with a funky pulse to its architecture redolent of Faith No More; or "No" which sounds more like an Armored Saint song (vocals and all) circa 1991 than Death Angel...

Oh wait, that's nearly HALF the fucking songs on this disc, and while none of them are quite so horrid as my outrage might imply, none of them are remotely relevant to my interests either. And these are just the ones I've actually listed! In truth, there are only about 3-4 songs on the whole album which resemble anything I'd actually want to hear from these Californians. I was, by 2004, bored to death of all of the alt rock, grunge and funk influences of the 90s that these guys were so enamored of, and I don't want them spoiling a fucking thrash album when the genre finally grew some balls again and decided it was okay to exist. How many of my heroes of the prior decades fell to the allure of that shit? Even the mighty Slayer was toppled when they suddenly thought they were Body Count. So you'll have to forgive me if I found The Art of Dying mildly frustrating in its excesses and the fact that it so openly weaves its outside influence into what would otherwise be an acceptable half dozen speed metal songs that, while nothing special, are at least worthy of their name.

It almost felt like Death Angel was afraid to dive right back into the music that made it what it was at the best of times. "Thrown to the Wolves" is a reasonably savage speedster with some predictable if punishing thrash muted rhythms, haughty and aggressive vocal lines and well placed backing shouts. "Prophecy" follows a similar pattern, but I really like the resonance the reverb creates over Osegueda's voice in the verses, a bit of that John Bush bite creeping into his mid range. "Spirit" is another decent tune with a number of melodic speed licks, but it's got a more melodic timbre to it and some bluesy, backing guitars and an acoustic breakdown which sides it more with the non-thrash constituents on the album as much as the thrash. Even songs like "Thicker Than Blood", with opens with some promising filth before becoming what is more or less a brazen punk rocker with more vicious vocals; and "The Devil Incarnate" which is quite possibly the catchiest song on the album for the vocals and doom/thrash grooves, feel hesitant to commit to that viral intensity of their formative years.

But it's not all that unexpected, really. Since Frolic Through the Park, the band had made it quite clear that they would deviate from a straight thrashing course whenever it suited them, and to be fair, they seem to have a decent grasp of the blues, grunge, groove, funk and punk influences that fashion many of these songs. From a technical standpoint, there are few problems here. The mix is kinetic and clear, with all instruments level and an appropriate punch to the guitars. Osegueda sounds as professional and focused as ever, the right balance of vicious acid and nasal melody that he was always aiming for, even when he veers off into Mike Patton or Layne Staley territory. The new guitarist Ted Aguilar fills Gus Pepa's shoes admirably, though a lot of the guitar leads throughout this album reek more of a hard rock and blues inspiration directly more than the explosive, frivolous flights of terror that helped cement the debut into thrashing infamy. The other members' vocals are adequate, if not as tight as Mark. The lyrics, too, aren't all that bad. A dozen or so cliche lines strewn about its pensive horizons, but the ability to apply personal, meaningful and effective imagery is not lost on them.

Ultimately, it wouldn't be a far stretch to call this Act IV, or the long lost Organization album that no one really wanted, because the thrash they built their band upon is the exception, rather than the rule. From the fine glint of the acoustic intro to the ensuing rush of "Thrown to the Wolves", there is this hopeful impression that Death Angel has returned, at long fucking last, and is about to kick our ass in, but too soon does it betray any notion of this revival, as it meanders off into the same peripheral detours that sullied its predecessor.

Verdict: Indifference [6/10] (your taste leaves us wanting much more)