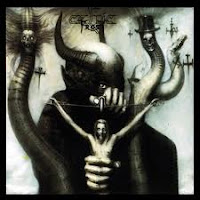 If Celtic Frost's early EPs represented a dark dungeon of forsaken pleasures, then To Mega Therion must be the opulent obsidian stronghold which covers it; the bastion of utter darkness from which its perverse overlord metes his reign upon the surrounding realms. Heavier, more consistent and more riff laden than either of its terse predecessors, it's essentially the pinnacle of creation for one of the most innovative metal acts of the 90s, ushering in an entirely new domain of exotic atmospheres and hinting at myriad possibilities for further exploration. We know in retrospect that several of its future fluctuations would succeed more than others, but To Mega Therion added a fresh, coherent sheen of midnight to not only the band's own morbid legacy, but to extreme metal in general. An opaque veil that has yet to be lifted.

Beyond this, To Mega Therion is an album I also hold dear due to its influence upon my own development on my second (and later primary) instrument, the guitar. Officially, I was studying under an instructor who thankfully customized his lessons towards my taste through a lot of hard rock tunes (Dokken, Scorpions etc), and a brief conceit to teach me "Jump in the Fire"; but in the company of my 13 year old thoughts, with an old Peavey amp in the basement and a mutant Kramer Striker, I was plugging away to the inspiration of Celtic Frost, among a few others. The slower chugging and expressive but simple power chord patterns used in Tom G. Warrior's composition provided the perfect initiation to novice thrashing. Simple to ascertain and execute with standard tuning, and heavier than most terrestrial planets, To Mega Therion was an infallible seduction to a darker musical sphere, and I can't be alone in thinking this: countless thrash, heavy, doom, black and death metal bands over the course of decades would use its content as an aesthetic blueprint for their varied careers.

Stylistically, the lion's share of the material written for the full-length does not deviate greatly from Morbid Tales and Emperor's Return. Or for that matter, Hellhammer. The focus is far greater on slower, crushing numbers in the vein of "Procreation (of the Wicked)", "Return to the Eve" and such than the hardcore-infused punk riffing prevalent on several of the EP tracks, but you can still clearly here the roots from which the Swiss legends sprung, and many of the chord patterns found on cuts like "Jewel Throne", "Eternal Summer" and "Dawn of Megiddo" clearly reflect the same balance of punctilious, primal composition with eloquent lyrical despair. Celtic Frost was always been a band aware of its technical boundaries, as far as musical ability. They weren't forcing the borders of the genre so much as their German and Bay Area contemporaries, but they took what they had and made it work, conjuring aggression through the atmosphere that the thick picking implied, to compensate for this general lack of speed...

What this album might lack in machine gun drumming and complex string wizardry, it more than makes up for in its several brilliant decisions to incorporate orchestration via the use of a French horn (Wolf Bender), shrill operatic female vocals (Claudia-Maria Mokri) and Reed St. Mark banging on a timpani in addition to his normal kit. The intro piece, "Innocence and Wrath" feels like a European answer to the classic Godzilla theme, and it's no accident: the piece instantly sets a mood for the remainder of the track list, and when the general motif returns in "Dawn of Megiddo", or culminates in the operatic chorus to "Necromantical Screams", the whole of To Mega Therion is bound together in a pervasive, drowning and depressive atmosphere that to its day was incredibly novel and immediately unforgettable. I can't say that I love all of the sparse female shrieks throughout the album. They often grate a fraction more than intended. But how many Gothic, doom and black metal bands today rely so heavily this technique in their 'beauty and the beast' interplay?

Despite its deathly demeanor, which arguably peaks in the doomed gait of "Dawn of Megiddo", To Mega Therion is not an album lacking in puerile, rampant energy. Tracks like "Jewel Throne" and "Fainted Eyes" are rife with primordial, thrashing energy and intense grooves anchored by St. Mark's muscular throughput. I'm not trying to advocate for the jock mosh sect, which has transformed through the decades from an innocent and mutual release of testosterone to alpha male preening, but if you can't sway your fists (or at least your head) to the riff set of "Jewel Throne", it's likely you just hate thrash metal. Walk away, man. Just walk away. To boot, this is one of the tracks which accelerates itself, culminating in some of the punk pacing of their earlier releases. "Circle of the Tyrants" was also drafted to this album from the Emperor's Return EP, and while I have maintained a slight preference towards the original, the brighter, raw treatment here fits well into its neighbors. Another example of how the album can shelf its weighty Gothic atmosphere to flex some brute strength at the audience. Yet another: Dominic Steiner's loud bass chords during "Necromantical Screams".

Tom's vocals are superb here, and arguably the best they've ever felt on any of the full-lengths. Dark, tense, and cumbersome, his accent and timbre barking out the dark prose like the noblest of savages. An exception might be the bonus studio jam "Return of the Eve", on which the vocals are so heavily effected that they can feel as silly as they are charming, but this was not a core component of the original album and thus easily brushed off. What's more, the lyrics retain the serious nature of the earlier works. Slayer was singing about Satan and psycho killers, Venom about Satan and cocaine, Destruction about Satan and the meat packing industry, but there was something so ominous, grandiose and mature about Celtic Frost's paeans to avarice, pride, and the lessons inherent in the occult and mythology. The sequential, conceptual bindings of "The Usurper", "Jewel Throne" are also interesting. Once again, a huge source of inspiration, this time for tens of thousands of black metal bands to follow (notably Emperor and the earlier Darkthrone canon).

All this aside, I must admit that I have never found The Mega Therion to be the most flawless of jewels. A huge part of this is that I don't really care for the instrumental "Tears in a Prophet's Dream", an electro/ritual/ambient track which feels even less coherent than "Danse Macabre" on the Morbid Tales EP. It's not that I don't appreciate Celtic Frost's desire to experiment, but the random bass chortling, percussion and goofy wails here have always conspired to take me straight out of the experience. It seems like they threw it together and placed it on the album just because 'they could' rather than to pursue an honest artistic abstraction from the metal surroundings. Thankfully, the track that follows "Necromantical Screams" is so damned good, or "Tears..." would seem even more of a souring anticlimax. Otherwise, a few of the shrill vocals and the fact that "Circle of the Tyrants" feels mildly redundant being here would be the only nitpicks I could launch against this timeless behemoth, and for the latter...I will begrudgingly admit that, as one of their best songs, it belonged on a full-length so more could hear it.

Coverage of this staggering monstrosity could never be complete without a nod to the choice in cover art. Though Geiger's Satan I had been originally conceived in the 70s, it was the perfect match for Frost's ungodly lyrical explorations. The cynical, sacrilege of its imagery would prove iconic to generations of metal fans, atheists, occultists, and it was also nice of Warrior to 'keep it in the family' (aka country) by collaborating with the Swiss surrealist. What's more, it to me represents that Celtic Frost wanted to hint at a wider range of classicism and art beyond the metal spectrum, almost as if they were prompting the audience to smarten up, expand ourselves and look further into other fields of depth and vision (a tactic they'd repeat with the use of the Hieronymous Bosch painting for Into the Pandemonium). I'm sure for many of us, it worked. By extension, so does the album. As grim an enlightenment as nearly anything that came out of this formative, important period in aural extremes, and in my opinion, one of the best Swiss works in the entire genre (excepting only Coroner's 1988-89 masterworks and Samael's underrated Passage, all of which are of course either related to or directly inspired by this very band).
Verdict: Epic Win [9.75/10] (you won't see the coming fall)