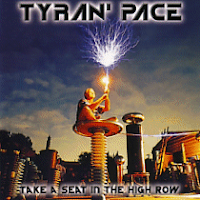 Tyran' Pace is a band best remembered as being Ralf Scheeper's vehicle before joining Gamma Ray, and later Primal Fear. From 1984-86 the band released the trio of Eye to Eye, Long Live Metal, and Watching You. They were fun if forgotten albums, Ralf giving his best early impressions of Rob Halford, and after that point it was long since assumed that the band had been hung up to dry. Yet for some reason, 12 years after the fact, a new album saw the light of day, with an entirely different lineup. Apparently, a few of the members that had purchased the band name from former axeman Oliver Kaufmann at some point in the late 80s, and saw fit to release a sort of reunion/tribute with all new material...

This is the sort of action that generally spells disaster within the metal community, but for some reason, a few ex-members of Stormwitch got together with singer Michael Dees, and against all odds, they made it work, or at least prevented a total meltdown of the band's legacy. However, I should note that Take a Seat in the High Row has very little in common with the sound of the earlier Tyran' Pace albums, so it would be wise to approach this version of the band as a different beast. Had the members run with this project under another moniker, who knows, it may have found some legs to stand upon, but it remains an anomaly.

Take a Seat still mirrors the highly melodic metal of the 80s efforts, but there is much more of a modernized, progressive/power leaning which stems largely from the use of a keyboard player as a full-time member of the band. Michael Dees is no Ralf Scheepers, that is to say he cannot hit the same range of notes, but in a way, he is forced to compensate by sounding more unique, and not simply channeling Priest's frontman. Don't get me wrong, Scheepers was excellent at this and has come into his own by this time, but the old Tyran' Pace records really felt like a washed out amalgam of Accept, Sinner and Judas Priest. That said, if you can't stand AOR hard rock or the lighter side of prog/power metal, you have no business listening to this album and will most likely despise it.

There's a good mix of epic, siren-like rockers ala "The Day Before the Day After" and "Motor of Society" which can certainly get the blood flowing if you favor a glimmering mix of clean and electric guitars, keyboards and soaring vocals. "This Story" and "A Penny For Your Thoughts" are the tracks that most resemble the earlier Tyran' Pace, and arguably the best here. But much of the album is taken up by far more atmospheric, prog lite pieces, ala the bass and synth driven verses of "Gone With the Secret" or the balladry of "Answers" which sounds like Mr. Big trying their hand at a "Silent Lucidity", or the funky 80s hard rock of "Your Second Me". "Follow Me" sounds like something Phil Collins might have written if he were in a hard rock band. "Lake of Shit" is faster, and more glorious, with sailing leads and a bewitching speed metal thrust, but all of these things do not really jibe with the title, so it comes off a little strange and goofy. "Eternity" is a brief and throwaway ballad, while "Feeling vs. Time" is a much more stretched out, instrumental power ballad...with a lot of keyboard orchestration, and it's actually not bad.

Take a Seat in the High Row will not find its market in most of the modern metal audience, but if there are a few of you dreamers left out there that enjoyed gleaming, atmospheric hard rock and radio friendly metal of the late 80s with a lot of synth (think later Fastway, or Saxon's underrated 1988 'commercial' album Destiny), you could do worse. And that's really what it comes down to: the new Tyran' Pace arrived and departed without any noticeable hype or fanfare, but somehow managed to avoid the catastrophe they were due for even thinking up such an inane plot.

Highlights: Motor of Society, This Story, Lake of Shit