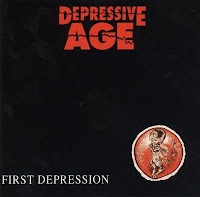 After bands like Mekong Delta, Watchtower, Psychotic Waltz and Deathrow had taken technical, melodic, schizophrenic thrash metal to new levels at the end of the 80s, I half expected a whole slew of imitators to usher in the next decade. Sadly, the style seemed to subside almost as quickly as it had begun. But there are a few notable exceptions. One of these is Germany's Depressive Age, who managed to land a deal with BMG/GUN records around the turn of the decade and release a string of energetic, interesting albums that unfortunately went unnoticed. Part of the reason would be the band's badly timed ascent, during an age when metal as a whole was falling flat on its face due to the emergence of grunge and nu-metal, and the popularization of hardcore and metalcore music among the fans of heavier music.

They didn't last much beyond the 90s, but at the very least they gave us a few quality albums earlier on in their career. One of these was the debut, First Depression, which arrived in 1992. Some might cite that this is one of their less experimental releases, and thus less important, but I would beg to differ. Depressive Age were at their best in their earlier years, where a large portion of what they were performing was still crisp, Teutonic thrash/speed. A lot of what makes the band unique is the spasmic higher pitched vocals of frontman Jan Lubitzki, whose heavy accent makes him quite the character on this release. Fully capable of a shrill, siren-like range, he's actually better when he's performing in a lower, creepy octave, and best when he creates a bridge between two, soaring along like some decrepit power/speed vocalist. The drums and riffs are also quite well plotted, with the same clinical appeal of a Wolf Spider, Watchtower or later Deathrow.

"Awaits" is a gorgeous acoustic piece that leads into the paranoid hammering melodies of "Beyond Illusions", and I could never get enough of the band's raging, crisp guitar tones that sound so heavy on the mutes yet graceful in the open chords. Lubitzki has a nice echo to his higher vocals here that remind me a little of Peavy from Rage or Wolfgang from the first Mekong Delta record. "The Light" begins with some killer drumming and a quick shift from ominous, warning melodies to a a subtle, jazzy percussive thrash, Lubitzki switching off and on from a lower tone to his expecting wailing. "No Risk" has a dreamy distorted bass intro, soon blessed with creepy chords that gather speed into a warped rhythm that feels part Watchtower, part Voivod. "Autumn Times" opens in shrill electric bliss, the guitars like lab warnings that something toxic has escaped the safe room. There are some fine speed metal licks throughout this piece, and it never wears thin across its 7 minute length.

The latter portion of the album holds up fairly consistently, first with the ringing miasma of axes that christen the hyperactive "Transition", which leaps from tempo to tempo over Jan's escalating vocal lines. "Innocent in Detention" features a few moments of moody clean rhythms, and here is one of the places where Lubitzki's accent can strain on the listener, with a little spin to it that reminds me of a heavily German accented Jonathan Davis, though he eventually stretches into his more familiar range and some searing speed metal leads and rhythms cap off the track. "Never Be Blind" has some of the silliest but catchiest vocal hooks on the album, with Jan really pushing the limits as if he were a shrieking John Lydon, and "Circles Colour Red" is simply one of the coolest songs on the album, with steady, driving drums and guitars thrashing out like a trapeze artist.

First Depression is a niche title, for the small subset of retro thrash fans that appreciate the more technical progressive, experimentation that was happening on the fringes of the more mainstream, American sound. Certainly if you've got a crush on Mekong Delta, Deathrow, Vendetta, Watchtower, Realm, Destruction (Cracked Brain), End Amen, or Psychotic Waltz it would be worth hearing, and it remains one of the more enduring albums for Depressive Age. If you can forgive the cover art...