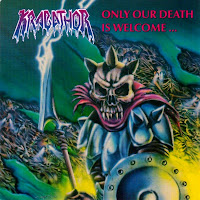 Of course all death metal had its roots in thrash metal, but in some cases you can hear it a lot more clearly than others. Krabathor is one such example, at least on their debut Only Our Death is Welcome, which, like most of the band's discography, has come and gone with very little recognition. The Czech Republic is a country known more for its cult black metal acts such as Root or Master's Hammer, but this band was proof that extremity of another kind was once alive and well in the region. Today you might hear a lot more Czech grindcore or progressive tech-grind than straight up death, but in 1992, the world was a different place, and it was Krabathor's to take.

This is the work of one Petr Krystof, who is the sole member of Krabathor to survive the band's entire career, though he's currently put it on hiatus, and it's unknown at this time whether he will continue. Through the years, he has been joined by a crop of musicians, including the prolific Paul Speckmann, who would partake in Krabathor from 1999 until around the time Petr called it off. Aside from songwriting, Krystof handles the guitars and vocals. Here his playing is heavily influenced by chunky 80s thrash/speed metal ala S.O.D., Sepultura, old Metallica, Slayer and the like, with the brutal vocals channeling a mix of Jeff Becera, John Tardy, Martin van Drunen and a mix of other prototypical death metal frontmen.

Only Our Death is Welcome consists of 10 tracks, but of these, three are brief instrumentals serving as intros or intervals. "Royal Crown", "Before the Carnage" and "Worried Childhood" are all composed more or less with a keyboard, and I've always enjoyed the placement of such tidbits on early death and thrash metal albums, "Worried Childhood" with an additional guitar in there. It's true that none of them really fit with the music surrounding them, but if existing simply to an enhance the atmosphere of what would otherwise be a fairly stock death/thrash metal record, then they get a pass.

One of the things that strikes out at me with regards to this debut is that the sound is pretty solid, not only for 1992 but even by today's standards. The guitars are extremely meaty, but straightforward, with effects only used for the solos and a few bridge segments. The leads are competent enough, and the drumming of Petr Kopecek are crashing and livid. The bass seems a little weaker in the mix of the record, but the guitars themselves are quite thick and offer an almost unexpected compensation. Most of the vocals are done in Krystof's dull-headed grunts, but he'll occasionally offer a counter-sneer against the more deathlike phrasing. For an album coming out of the Czech Republic in the early 90s, I'm more than satisfied with the sound.

Where the album does falter a little is in the songwriting. Not that I'd kick it out of bed for crackers, but though the majority of the riffs pummel along the old school death metal tempos, there are very few I'd consider truly standout. "Psychodelic" follows the intro "Royal Crown" with a steady stomping thrash riff one might expect out of S.O.D. or Sacred Reich in the previous decade. As the pace picks up for the bridge, it reminds me more of early Sepultura riffing, with a trace of Kreator. The riffs sort of collide into each new segment of the song, and the part I probably liked best was the thick, doomy chords over which the first brief lead guitar is weaved. The second lead section is also quite good, if a little rough around the edges, but the dull thrash rhythm that connects the two is a little lacking. I liked "Eternal" more in general, though it opens with a similar, thick thrash riff, the bridge section rocks, and the leads sound vibrant over an old school, slowly crawling death metal riff.

"Convict to Contempt" opens with some charging, choppy atmospheric chords over a steady surging of the drums, then cycling through a few grinding, grooving thrash rhythms under some of Petr's most guttural vocals on the album. "Pacifistic Death" takes over with a surgical feeling technical death/thrash rhythm before interrupting itself with a few less interesting riffs, but once more the lead section is pulled off rather well. "Preparing Your End" is a bit long at 7:30, but it weaves a fairly morose course, from moody opening to another semi-technical thrash piece sorted into a good number of riffs. "Killing My Wrath" actually has some of the best rhythms on the album, like the spacious breaks around 2:30 and a faster rhythm near the close that reminds me a little of something which Death might have included on their first two albums. Only Our Death is Welcome ends with "Madness of the Dark Shadow", which is my single favorite track, thanks to the dense thrashing of the guitars and the subtle, numbing vibe that seems to evaporate right through the guitar chords.

It may have cheesy cover art, and it may not be half as brutal as much of the other death metal arriving in 1992, but I actually think Only Our Death is Welcome is a solid debut, and might very well still hold some appeal if you're into the production of earlier records in the genre, or rather the formative years where many were crossing the bridge between death and black (ala Cancer, Sepultura, Protector, etc.) This is not the best work of Krabathor, but it seems to have aged rather well, and I may get a kick out of it now even more than I did when I was first exposed to the band.

Highlights: Convict to Contempt, Killing My Wrath, Madness of the Dark Shadow