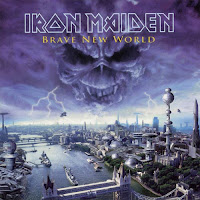 In three decades of listening to heavy metal music, there are few periods in which I was so glum and down on a band as the awkward, silent years after Iron Maiden released the atrocious Virtual XI, which pretty much tolled the death knell for the band with Blaze Bayley on vocals. Once again, I should clarify that I actually do like Blaze, in particular his work with Wolfsbane and his solo band, but he just never felt right in this band...and of the few live performances I've heard, in only a few of the songs was he clearly doing justice to the Maiden standards. Having Dickinson off with a fairly successful solo career (making better records than Maiden) and watching the world race past with a revival of power and classic NWOBHM sounds in the late 90s must have all shaken off on Harris and co. The result was that the band were going to reunite with the 80s, Dickinson lineup, Blaze graciously stepping aside.

So Bruce and Adrian Smith joined back up, and the band decided to keep Janick Gers for the three guitar attack. To be fair, the guy put in enough work to deserve it, and having seen them live in this incarnation, I can honestly say the three guitars do not hurt. As the result of all this kissing and making up, Maiden released Brave New World right about the turn of the century, and oh my was it glorious. Not in the jaw dropping, new masterpiece sense, but by the simple virtue that one of your favorite heavy metal albums had released their best album in over a decade (since Seventh Son of a Seventh Son), and gone were the grim memories of the tired and spent Iron Maiden of the 90s. Brave New World is not a perfect album, but it's a damn good effort, and as there have been no more brave new worlds since, well...I'll take it.

I will say that the band wasted no time in placing the best track on the album in the opening slot, and "Wicker Man" had me parading about the streets when I first heard it, wearing a denim jacket far too small for me, reeking of old alcohol and grunge, but absolutely no regret! No, sir. The song reminded me of everything I had always loved about this band...solid old heavy metal rhythm guitars, brazen vocal melodies and a solo that has more to offer than some showboat's flatulence. Granted, this is a happier song than most of the band's past glories, but it certainly has an emotional impact, as any track with Bruce Dickinson pointing at you and screaming 'Your time will come!' is likely to have towards any fan, on so many levels. Quite an exhilarating song, and the rest of Brave New World had its work cut out for it...

And to my surprise, I was not disappointed. "Ghost of the Navigator" has a spacious, airy feel to the driving guitars, and a powerful, soaring chorus that shows Dickinson has not skipped a beat since his earlier years with the band. "Brave New World" trots along like one of those desperate old tracks like "Quest for Fire", with a nice segment around 3:00 where Bruce highlights the guitar melody, and a crisp, emotional dual lead near the final chorus. "Blood Brothers" is hard not to enjoy for its folksy swagger, though it does take a few minutes to really pick up into its string section. But for that final, sailing chorus, it is entirely worthwhile. "The Mercenary" is one of the tracks that was originally written for Virtual XI but ended up here. It's not the best song on this album, but I have to wonder, why the HELL was this not included on the predecessor since it clobbers anything on that album many times over.

Ditto for "Dream of Mirrors", which is supposedly co-written by Blaze Bayley. Not a great track, and certainly not enough good riffs to support its bloated 9+ minute bulk, but still would have amped up Virtual XI a little, and I can even mentally hear Blaze's vocals. "The Fallen Angel" has a killer lead-in riff which brings me back to a song like "Be Quick or Be Dead", but then surges into a solid mid-paced majestic rhythm which makes you want to swill your mug and then smash it off someone's head. The vocal hook in the pre-chorus is extremely cool, and the chorus does not disappoint as the guitar melody begins to dance below it. "The Nomad" is another track from a few years before, and while it has some great atmosphere, mystic leads and vocal climaxing courtesy of Bruce's weathered throat, we have another case where the 9 minutes isn't entirely justified through the actual music. "Out of the Silent Planet" is based loosely on some pulp sci-fi stories (like the C.S. Lewis novel of the same name, and the classic film Forbidden Planet), and features some great speed metal licks when it picks up the pace from its sobering, psychedelic intro. The chorus here is yet another killer, though obvious. "The Thin Line Between Love and Hate" is probably the only longer track here does itself justice, with a slow escalation towards the climactic chorus, where the standard rhythm falls out for some thrusting drums and emotional screaming. The song serves as a pseudo-biography for the band's separation in the 90s.

Brave New World has a very bold production which also separates it from the band's prior recordings, but I have mixed feelings on this as I loved the old 80s sound. It's got a punchier edge to the guitars and feels more 'digital', but the melodies carry through gracefully and it certainly delivers if you've got good listening equipment. Style-wise, the writing does pick up where Fear of the Dark left off, ignoring the blandness of the two albums in between, and I do get confused that the 1992 album gets so much grief when this does not, but I do think this is the better of the two, so with Dickinson and Smith back in the fold they had tagged the clouds once more and were off, writing in the sky.

Highlights: The Wicker Man, The Fallen Angel, Out of the Silent Planet, The Thin Line Between Love and Hate