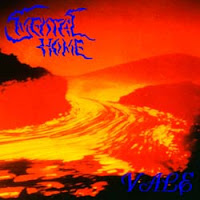 As the Russians have proven here, a lot can and will happen in a few years. Mental Home had taken the style they implemented with the Mirrorland EP and capitalized on it in every way possible. Vale is a beautiful and original album of melodic, gothic doom with a unique cultural spin that manifests through the native classical influence in the riffing of the guitars and the bristling synth-work. There was the addition of a new guitar player here, Sergey Kalachov, which allowed Roman Povarov to focus more intently on his keys, and the result is a major payoff. But perhaps the most improved is vocalist/guitarist Sergey Dmitriev, who is now managing not only his gruff, tormented vocals better than the EP (he sounds a little like Johan Edlund on the Clouds album), but successfully implementing both black snarls and death grunts wherever he deems them fit.

Looking back, Vale struck at exactly the right moment where it should have been a smashing success, but whether it was a case of limited distribution or lack of word of mouth, the album didn't quite shudder the walls of heaven. I say this because melodic gothic/doom was at a pretty popular point thanks to Paradise Lost, My Dying Bride, Tiamat and their ilk, but also Mental Home were somewhat comparable to the melodic death exploding out of Sweden in the mid 90s. The atmosphere of the album is immense, the guitars like glazed tears on a statue's face on an overcast day, the keyboards perfectly aware of where to appear and where to take the sidelines, and even the lyrics are improved. In fact, this is probably one of the best Russian metal albums I own, and it's not the last time the band would tap their muses and take them for a ride.

"Stranger Dove" begins with scintillating atmospheric synthesizers above a crackling fire, and then the immediacy of a good, stark doom rhythm that trails off with the tail of the synthesizer before a folksy Russian melody arrives. After this, there is much desperation and beauty to the verse, as Dmitriev uses his gothic, breathless vocals to great effect. Also of note are the brief, theatrical pauses used later in the track, and the piano subtext used to flow some of the heavier riffing together. But even this is merely a warm-up to the next two tracks, some of the best of Mental Home's career. "Southern Calm Waters" is both eerie and beautiful, with the perfect miasma of melancholic guitars that twist into an unforgettable pre-verse, there to escalate into an eagles vision of the Volga as it sets its course, carving the land. And then comes the fucking doom! But even as Dmitriev lets rip his gnarliest snarling, the band retains its grace. "Aevin's Cage" is likewise extraordinary, with a saddening surge that gently uplifts around :45 to a wonderful melodic pace before the verse, which once again features one of the most elegant and tear-welling guitar riffs known to man. The climax at about 2:00 is reminiscent of something from Tiamat's Clouds, another excellent album.

On the strength of these opening tracks alone, we'd be looking at a perfect album, but there are five left to go, and sadly the strength does not hold throughout the entire 45 minute experience. But it comes very close. "The Euphoria" returns to winding rivers of sublime, sad synthesizer spiced up in both power chords and cleans, with a loud bass presence courtesy of Denis Samusev. It's a solid track, despite its nearly 8 minutes of content, but there are few surprises lurking about its corners and angles, no glorious payload awaiting delivery as in "Aevin's Cage". Still, it is highly atmospheric and not a crutch. "The Vale" creates a panorama of lush synth and crushing doom, majestic and very even, though it too lacks any decisive riffing that could make a grown man cry. "My Necklace" is a great, if short track that offers a Russian parallel to Amorphis' Tales from the Thousand Lakes (or Elegy), and "Christmas Mercy" moves through segues of whispered, atmospheric tranquility and softly thundering background chords, with a cute little melody at about 5:00. Closer "Their Finest Voyage" ranges from an urgent, rampaging intro to a medieval synth line that would be perfect for your role playing fantasies, until it wallops you with a helping of progressive black/doom.

Though the last 25 or so minutes of the album are good, and still a vast improvement over the bands groundwork from Mirrorland, it does grow a little disappointing that the band isn't about to slam your emotions with another "Southern Calm Waters" or "Aevin's Cage", and that's really the only complaint I have about Vale. It sets you up for such anticipation and then lets you down easily. However, it's still good enough to listen through the entire disc, and it's still superior to so much of the drawling gothic ladydoom that was beginning to pop up in Europe, which would plague us with years on end of shitty female-fronted acts that appeal to suckers with bad fairy tattoos and a Harry Potter fetish. I often debate whether I enjoy this album more than its powerful symphonic follow-up Black Art, and I'll have to answer yes for the purposes of this review. Vale has a beautiful subtlety to it which makes it memory durable, while Black Art is straight to the face, over the top orchestrated bliss (though still quite good). If you've got good taste, or f you enjoy albums such as Tiamat's Clouds, Paradise Lost Icon, or Pyogenesis Sweet X-Rated Nothings, and have somehow missed this, Christmas is early this year. Enjoy!