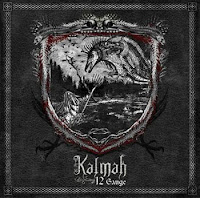 Every time you're about to throw in the towel and give up on the tired genre that is melodic death metal, some band, generally one of the veterans, comes along and kicks it all back into gear. Kalmah have done this numerous times throughout their career, so it's no surprise that their 6th full-length effort delivers the goods. We're not talking a perfect album by a long shot, nor one of their very best, but 12 Gauge more than packs a few punches in, and it benefits from what might be the most crushing production the band has yet committed to disc. Yes, the guitars are titanic, voluminous tidal waves that crash down over the listener, and yet they still leave another breathing room for the bands unceasing melodic onslaught. The synths are still here, as brazen as ever, but they feel very level now that the guitars are biting and chugging this hard.

The band is also now using their added orchestration for more than the Children of Bodom-style duels with the guitar during the solos. Oh, they still do it, but pay heed to the increased attention to choirs that are often brought directly to the forefront of the recording. Pekka Kokko is louder than ever, with an ever deepening grunt that seeks to embellish the charging melodies as once Amorphis did so wonderfully (or Noumena). 12 Gauge might feel like a strange title for a Kalmah record, but once you hear these guitars you will feel like your eyes are staring straight down the barrel of one. Boom!

"Rust Never Sleeps" begins with some pleasant acoustic guitars before the rise and swell of the synthesizers, using a more natural, symphonic pad than normal, and then the chomp chomp chomp of the falling axes, the melodic break, and we're off to the races. The song reminds me a lot of something they would have written for my favorite Kalmah album, They Will Return, only thicker and with a choir. "One of Fail" wastes no time in following through a glorious, atmospheric charge that becomes even more mighty as the bridge riff erupts, and this one's got some nice leads in there. Other energetic outbreaks include "Bullets are Blind", "Hook the Monster", and "Godeye", which would be my personal favorite of the faster 12 Gauge material. But then there is also the excellent "Swampwar", with a hugely moving chord progression up front that parts for some of the more gracefuly melodies on the album. "Better Not to Tell" also benefits from its slower pace, a slew of synths shining across the memorable impressions left by the guitars. "12 Gauge" itself opens with a folkish clean section, before its fist pumping thrash emerges, but it's not a great song, and I also got a little weary during the closing original "Sacramentum". The Japanese import also includes a cover of Thin Lizzy's "Cold Sweat", and Kalmah really make it their own with epic, crushing chords and walls of symphony.

The Finns have certainly written better songs than what we've got on 12 Gauge, but their tone has never been so massive, and it might be just enough to turn the heads of those that have overlooked this clearly underrated act. Like some of their peers Omnium Gatherum, Norther and Noumena, Kalmah understands how to stay in the melodic death game for extra innings and develop a solid batting average. This is not their finest hour, and I don't favor it over Black Waltz or They Will Return, but it's almost on par the band's previous For the Revolution and I'd be remiss not to mention that it sounds pretty badass coming out of the car stereo speakers...