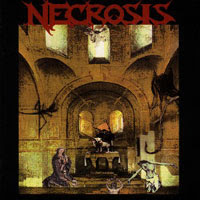 The death metal dimension that breached the walls of reality in the 1990s and spewed so many unnameable horrors into our breathing space might have been purged by fire above the surface, but below the crust of our world exists a network of catacombs, a labyrinth of unspoken horrors that eagerly await, with vampiric ecstasy, the life's blood of any spelunker who makes it past that sliding wall, pile of rubble or eerie turn in the corridor to arrive at their untapped sanctums. One such cavernous lair is occupied by the specter of Rhode Island's Necrosis, one of many bands to wield the title, but also one of the best...

The band was formed in 1989 but didn't get their first (and only) full-length for several years, after their obscure Crown of Thorns demo in 1992. However, it should be noted that Necrosis was one of the best old school death metal outfits from my liberal hell of New England, and though this album might be their sole legacy to the world, it was a lasting one, worth revisiting if you've been enamored of the cavernous trough of morbid death revival acts that have offered themselves for our mutual intoxication in these past few years. It also bears mention that Acta Sanctorum is one of the few releases ever on Sweden's Black Mark label from an American band. As far as noteworthy alumni, most of the band fled into the greater world to live normal lives. The exception would be drummer Aantar Lee Coates who also performs in East Coast death metal acts like Maryland's Horror of Horrors and Florida's Diabolic.

Though the band were not lax for their technical skills, Acta Sanctorum is an album that succeeds in part due to its messy, chunky schizophrenic atmosphere. The riffing is thick and destructive, but ever clashing and sinking like floes of black ice and ash on a primal, volcanic world. Justin Badorek is clearly not human, but instead some vicious, otherworldly abomination reared on cryptic American death metal, falling somewhere between Immolation's Ross Dolan and Forced Entry's Tony Benjamin on the vocal blasphometer. Coates is a shitstorm of energy, and bassist Mike Spencer evokes a truly gruesome rectal sludge, but perhaps it is the thick, focused chopping of Erik Amelio's guitar which truly soils the material straight into the underwear of the mind.

"Psalm of Sorrow" creates an immediate, barbaric chugging over which Badorek carefully measures his vocal blasting like a skilled percussionist, as the band rips into slowly muted breakdowns and blasting old school eruptions of primordial turbulence. Violent impetus runs through the spine and nerve endings like a molten, ebbing pulse here, as if the album could immediately regress the listener back through the evolutionary chain. The leads are brief and messy, and there is a strange narrative break before the crushing, final breakdown. "Acta Sanctorum" is an eerie, immersive instrumental piece with some excellent clean guitar work, bustling bass and atmosphere created through tolling chimes, deep ominous vocals and whispers. It's both dark and fascinating, and I get the feeling the band could have been a successful act in the dark ambient/ritual field had they so chosen that path. But "Vacant Diocese" arrives with pummeling force, a slowly grating doom guitar accompanies Badorek's neanderthal poetry. The track does operate with a lot of stop/start, but the ever churning riffs fascinate and the subterranean atmosphere is impeccable.

"Buried in Baptismal Robe" opens with a meaty, serpentine series of carnal thrash/death rhythms over which froglike chanting inaugurates the hammer of the vocal verse. The breakdowns in this song are disgusting...I have rarely had the urge to mosh in a decade or more but I found myself instantly starting to move in an uncontrollable spasm of violence. The vocals are fucking disgusting, this guy was one of the best of New England and its a shame we have nothing more from him. "Crown of Thorns" is the epic of the record, over 8 minutes in length, with more ominous bells and molasses level creeping grooves than you could use to enact any Edgar Allen Poe play, picking up towards a charnel house middle segment that endlessly evokes a primal thrashing from the gut. "Messiah Complex" carefully measures itself towards its rolling grooves, but once more the distorted weight of the guitar is such that you can forgive even the most pedestrian riffing as it sounds amazing, as intended by the forebears of the genre. With the closer "Martyrium", the band display once again their penchant for nuance in the ritual evil department, with horrifying low chants that echo through the vaults, and excellent bass lines accompanied by plunky, sparse guitars.

As I've mentioned in other reviews, I don't normally get into a lot of death metal from my area. This has gotten me into plenty of trouble through the years. Most of the bands are mediocre at best, simply copying the bland, empty US/slamming style or a bad approximation of their Floridian gods (and more recently, Swedish pioneers). Necrosis was one such act that stuck out like a sore thumb, and I lament the fact that they were unable to capitalize on their swank record deal and make a larger name for themselves. Today, they lay lost in a the obscure crypts below the surface of the death metal fanbase. But since so many bands have chosen to open the can of proverbial worms once more, perhaps it is time that the knowledge of this gem spreads far and wide to all who would hear it. Acta Sanctorum is cavernous and creepy, but at the same time it will beat your ass harder than any schoolground bully. A lost treasure of New England brutality.

Looks like something I will have to check out.