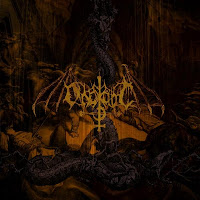 Ondskapt is one of the few bands that successfully hangs on to the naked tradition of the black metal genre and somehow succeeds in refreshing it with each new release, and alongside Watain and Dark Funeral they stand at the very foremost of the Swedish blasphemy. But where those other entities excel at writing faster, face-ripping Satanic volatility, Ondskapt is a far more morbid entity, capable of creeping out the listener like an old horrid film, as they give their compositions the space to breathe stale, dead air that bounces about the mind, casting ominous shadows. Ondskapt is a black metal gargoyle, slowly staring down at you through the ages with more wisdom burning inside its deadened stone lenses than most onlookers might ever garner.

Arisen from the Ashes is the band's third full-length accrual and trades in a smidgeon of the face-tearing, scathing intensity of its predecessor Dödens Evangelium for an increased sense of discomfiture. The band will still rifle through a blasting onslaught, but the majority of the playtime is devoted to a spookier, spacious exploration of the hideous occult, a ritual to rid the Earth of all hope and hypocrisy through the cleansing scourge of hellfire. It's not a surprise, as the band has evolved slowly through its roster shifts. Only Acerbus and Nabemih remain from the previous album's lineup, joined here by J. Wallgren and S.W. of Valkyrja on drums and guitars respectively, and rounded out by Avsky on the bass (who shares time in IXXI with Acerbus).

A bleak atmospheric intro paves the way towards the "Ominous Worship of the Divine", which perhaps misleads the listener into a feeling that this might be some generic, blaster-piece. This is the fastest track on the album, but even it takes a few pauses into a middle pace, and by the median it has devolved into slowly tinging drums, grooving black bass and eerie guitars straight from the mouth of horror. "A Graveyard Night" casts a hellish, dull glow through a serpentine guitar rhythm that is soon joined in resonant vocals and a slowly roasting atmosphere. "Vehicle of Stone" is nearly as morbid, with brief flirtations towards primal speed, and "Astute Sceptre" has this amazing overarching structure from which the guitars leer, bewitching subtly through a denser lattice of chords. The old black/death break at about 1:00 is a broiling catechism which can melt the wings off any angel of light. The remainder of the album is nearly as tight, with rapid title track being the best of its later moments, in particular the lurching, ominous tones entering the picture around 3:00.

Like a damned soul struggling to find an exit to his newfound pandemonium, grasping at lights which figure only as hallucinations in his mind, Arisen from the Ashes is a constant, cavernous reminder of the void awaiting every heart turned towards sin and sloth. It honestly goes above and beyond the usual Satanism to offer commentary on our media-nulled civilization, but cloaks its sentiment in the poetry of a paradise lost. It also does no disservice to the band's prior work.

Highlights: A Graveyard Night, Astute Scepter, Arisen from the Ashes