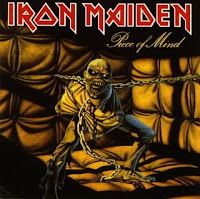 Piece of Mind is the 2nd Iron Maiden album to feature Bruce Dickinson on vocals, and the source of one of the band's biggest hits, "The Trooper". Strangely enough, these days, most of the tracks feel like forgotten gems, due to the fact that so many have been seemingly ignored in the band's live sets for a great many years now. But the bad tastes of band and audience aside, this is easily one of the best of Maiden's entire career, and certainly one of my personal favorites after Somewhere in Time or Powerslave. Each of the 9 tracks are splendid, powerful, melodic metal, and the album as a whole has a more reined in appeal than The Number of the Beast, giving it the slight edge in my opinion.

Just about anything I've ever loved in Iron Maiden's music is here in spades. Wonderful lyrics that reflect upon religion, war, history, science fiction and mythology, drawing on a number of classic sources. More guitar hooks than a bait & tackle shop, and an excellent, crisp tone to boot. An excellent performance out of Dickinson, who had really meshed into the band's landscape by this point. And a production which does not sound to me as if it has aged a single day in 27 years. Add to that the dark atmosphere of emergent NWOBHM gone 'eavy as all hell, and a great if simple cover image featuring the most recognizable mascot in metal music. We have a winner.

"Where Eagles Dare" is a sturdy track to open the album, with a lot of shuffle in its step. Twin guitars rambling out a passionate if somewhat predictable rhythm, and lyrics based on the 1967 novel of the same name, which was itself adapted to a film in '68 featuring Richard Burton and Clint Eastwood. The airy nature of the melodies in the bridge makes for a fine if elegaic tribute to the story and the war in which it was fought. "Revelations" features one of the most simple and unforgettable verse rhythms of the 80s, with the perfectly placed little bass steps and the beautiful, simmering melodies that transform the tempo into a fist flying rager, and then down into a thoughtful tranquility. The song feels compelling and timeless, as if it could have been written and recorded in the late 60s or 70s and wound up much the same. "Flight of Icarus" tells the tale of its titular, tragic Greek character, and was also used a single for this album. It's more of a narrative than the previous tracks, with the riffs structured about the story. And who would ever forget Dickinson's shining chorus vocal?

At this point, the hammer drops and the balls fly out of their zippers as Maiden crushes through two of their more pronounced exclamations, beginning with "Die With Your Boots On", a self-determination anthem, and a nice little deconstruction of omens and the prophetic bullshit that fuels so much religious nonsense throughout our history. Smith and Harris have some swanky little backup vocals here, and the chorus is just the type of manly expression that makes you want to leap onto a motorcycle, or a horse, or something. A jet ski if you've got it. But people might look at you strangely if you're wearing boots on a jet ski. Speaking of boots, "The Trooper" follows, ready to plant both of them, leather and steel, straight up your arse. Basically the ultimate war metal song before there was 'war metal', maybe not as good as "Disposable Heroes" but it came first. How many metal fans out there learned their first guitar or bass riff from this song? How many people who don't even like metal music remember this song? How many have covered it? It's an indispensable classic, and just as brilliant as the pageantry requires. Trotting, equestrian guitar rhythms and spiky vocal latitudes, excellent popping bass beneath the lead, and the lead itself...gorgeous.

The rest of the album is the half that I feel is sadly the more forgotten, but it's no less rapt or impressive. "Still Life" has a great melody that charges below the vocals, and Dickinson even has a robotic like tinge to the 'piece of mind' lyric. The dual guitars are brilliant here, especially as they quaff off into the slamming leads, and "Quest for Fire" follows suit with an epic hymn about early man and his travails against nature and beast, and the advent of the one thing that would raise them from beasts themselves into a more potent force. Many have pointed out to me that this is a bit of a silly track, but fuck, I'll take Iron Maiden singing about cannibals and dinosaurs any day over Dethklok or 3 Inches of Blood inhaling and exhaling their stale irony. Once again, there are some killer leads here, and a very pulp adventure feeling that is simply too rare in metal.

"Sun and Steel" is a hooky melodic samurai tribute with various literary references to the famous swordsman Musashi, and it's another of the tracks here which could easily have fit the decade prior, due to the soaring vocal harmony which could have just as well been Freddy Mercury of Queen. It's an amazing track, one of my favorites even among this lofty crew, and it's a goddamn shame that this didn't take off like "The Trooper". I'd kill to hear this one live, and if you've seen them do it...well, don't tell me about it. I've got enough in the world already to envy. "To Tame a Land" caps off the album, a morose, wandering epic based on the classic science fiction novel Dune by Frank Herbert. The tiny arabesque rhythms and edgy, warlike atmosphere of the track really fit the contested desert world of Arakkis, and certainly it has to be one of the best tributes (and one of the ONLY tributes) done to this literary masterpiece in all of rock or metal music. The bass and leads are unsurprisingly exquisite here, and though its the longest track here at over 7 minutes, I hardly noticed. Though I consider it my least favorite track on this album, it's still pretty close to perfect.

Piece of Mind is both a hallmark album and a wave of beautiful nostalgia. Old, indeed, but far from irrelevant, as its another essential fragment of the band's Golden Age (1982-1988) which catapulted them to the very top the pack. 1983 was the year of two of the greatest debut albums in all of metal history (Metallica's Kill 'Em All and Slayer's Show No Mercy), but even against those monstrosities, this album still holds its own, and I have a feeling it always will...

Highlights: All of them, but with To Tame a Land at the rear of the marching order.