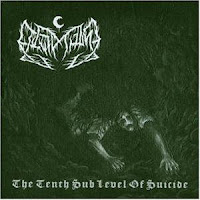 Press play. Begin the downward spiral. Suicide beckons with cold, grey fingers.
There is no light for you...
at the end of the tunnel
Leviathan is the work of Jeff Whitehead aka Wrest, California tattoo artist and DSBM one-man wrecking crew. If despair could ever be a beautiful thing, he achieves it regularly with his albums. Poetic song titles, carefully written lyrics, riffs elegant in their simplistic, torturous harmony. The aural equivalent of watching a snake slither. Repulsive and beautiful at once.
His vocals are much like I would imagine the cries of a patient in the days of early psychiatric 'treatment'. "Fucking Your Ghost In Chains of Ice" is a frighteningly grim track. If it were personified it would dust off its lapels casually and put out a cigarette in the eye of many bedroom black metal bands that try and fail to achieve this level of despair.
"Sardoniscorn" continues at nearly ten minutes with a nifty little riff that will stick in your head, along with an entrancing combination of vocals and percussion. There is a breakdown (no, not some mosh-fodder, trust me) that gives way to a positively creepy piano/bass section that I'll leave for you to interpret on your own.
Never ending the sound
rope creaking in mine night
the eyes of spectres
which call to me
reflecting every
movement to die
"Come with us
you belong to us
kill yourself
you deserve this."
The song explodes in a crescendo of pure, sweet, unfiltered black metal wonder. "The Bitter Emblem of Dissolve" almost sounds like it could be off a different album at first, giving off a Nordic vibe. As if fallen warriors are crying out to valkyries from some unfathomable eldritch limbo.
Skipping ahead, "He Whom Shadows Move Towards" has a terrific atmosphere and sound, almost as if My Bloody Valentine had given up the romantic shoegazing for black metal. I absolutely love this song. The vocals are absolutely tortured, however the song offers some dark, and yet magestic (and even at times beautiful) music.
Hidden in plain sight
uttering unheard volumes
a soliloquy of the shadow
darkest broad day-light
"Submersed" is a lovely dark electronic piece, a break from the fury if you will. The album finishes out with three long tracks, all amazing. The final song "At the Door to the Tenth Sub Level of Suicide" is the heaviest of the album, a fifteen minute tour-de-force and possibly my very favorite on the album.
The Tenth Sub Level of Suicide is an essential album for the black metal fan, even if the depressive/suicidal sub-genre isn't your bag. Musically, lyrically, it's all there and then some. Haunting, beautiful, so traditional and yet I've never heard anything like it. Perfection.
Verdict: Epic Win [10/10] (and ice is wept by the sun)
http://www.myspace.com/leviathanx666x
Posted by JD at 4:43 AM