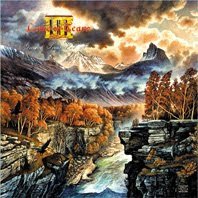 Look at the soothing stream & falls on the cover, or the coloured autumnal woodlands...the slate of the cliffs, and the rusty mirrored color of the sky as it weeps clouds across the reliable mountainscape. Let yourself fall into its beautiful clutches, as a dream awakens within you, and you are carried on a jet stream towards bliss...all the while, slowly reaching into your pocket for the cervix of leather and plastic that provides your comfort on this Earth. Yes, it is time to spend money again, and why not on something completely worthless? You have been accommodated with the second Greatest Tears release from one of Sweden's best doom bands, just in case you wanted to throw out your old, scratched Lake of Tears CD and replace them with contents that are NOT EQUAL to their original track lists.

I'd hate to dork out on you completely, but let's do a little math, shall we? Before these compilations were issued, Lake of Tears had 5 albums containing a total of 46 tracks. Combined, the two Greatest Tears compilations contain 22 tracks....ALL of which are lifted from the albums. So in other words, you are being sold almost 50% of the albums you already own. But let's say for example that you were new to the band, and assume that CDs are at an average of $12 USD (they are actually less if you order from Black Mark or several online shops today). Would you rather just buy the band's whole catalog for $50-60, or two compilations that do not feature all the songs for about $20-24? Or just buy the band's best pair of albums at that same price? I will never understand how some of these cut & paste collections see the light of day. Are they really that profitable? If Lake of Tears were a band with 12-15 albums out and veritable best-selling hits, then I might see the appeal of releasing such an album to prey on the new fans or older audience who couldn't give a damn about the actual album format. But they're an underground band who are barely a dot on anyone's radar (sadly).

As with Greatest Tears Vol. I, there are 11 tracks here, spread out without much rhyme or reason save that this is the more 'tranquil' of the two albums, featuring material that borders more on the mellow side, or outright folk/pop, with a few crushing exceptions. As this features more Forever Autumn material than the first compilation, it is weaker overall, but there are still some true classics here. Let's get the shite out of the way first: "So Fell Autumn Rain", "Demon You/Lily Anne", and "To Blossom Blue" are all tracks I could live without from that album. A Crimson Cosmos gets some love with "When My Sun Comes Down", "Devils Diner", "Lady Rosenred", and "Raistlin and The Rose", which are all fantastic. "Netherworld" is here to represent Greater Art, and the excellent "Headstones" from the album of the same name. Lastly we get the crushing Floyd tribute "Down the Nile" off The Neonai.

If they had tossed "Nathalie and the Fireflies" and "The Shadowshires" here in place of a few Forever Autumn bores, it would be a better overall selection, but since no one in their right mind should be purchasing this to begin with, I guess it's a moot suggestion. I cannot stress highly enough that your money and attention be directed elsewhere, if not to picking up the band's original albums then there are many other gothic, doom or folk metal bands who deserve your attention. Had the band and label worked together to provide the fans some non-album material, even demos or live performances, there might have been some resonant value to the Greatest Tears series. Spilled milk. No welling up the corners of the eyes. So, unless you really need that cover art sitting on your CD shelf, or another useless bookend, by all means, pass this by!