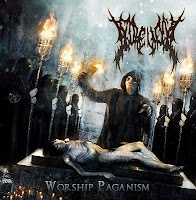 I remember hearing Gorevent's debut Abnormal Exaggeration from a few years back and thinking to myself: great cover art, miserably mediocre Japanese slam death band almost entirely void of anything resembling creativity or good songwriting. In fact, I reviewed it on these very pages. The same uninspiring note patterns you've heard from a million other bands lacking direction, and played without any inspiration. Unless, of course, it is your diehard intention to simply mimic that which has come before with no impetus for the listener's attention span.

Yes, Gorevent have done it again. Or rather, HAVEN'T done it again, because Worship Paganism, while it too has a pretty damn sweet cover image, is an even worse effort than its predecessor. Gone are the very faint traces of fire that haunted the margins of that debut, and in its place are more super simple, guttural stomp rhythms that you, me, or anyone else reading this blog could compose within minutes of learning to palm mute. I have struggled to find even an ironic value in this effort...as I often do enjoy some very crude death metal for the sake of its primitive nature and good intentions. But with Gorevent, I'm simply at a loss. Hailing from a country of such creativity in all elements of media, including metal music, this band may prove the antithesis...as it becomes painful to even distinguish one track from the next on this recording.

Don't get me wrong, this band is 'brutal' as all fuck, but how hard is it to be heavy when you're just bombing along on the same chug chug chug chug while a drummer crashes along sounding as if he's half-asleep? Tracks like "Human Demise" and "Heartless Massacre" are highly saturated in carnal slamming rhythms, dense bass and Takashi's guttural vomit spew, but the riffs soon become repetitive in the worst way...as they were not interesting to begin with. Why not take this same, crushing, lo-fi, low end strategy and apply it to a few good hooks? Palm mute, palm mute, squeal, bust out super old school rhythm with like 3 notes, then break it up with more chugging. I doubt this band would require more than a single string on their instruments, or even a few frets, if not for the squeals and power chords that occasionally cut through.

Unless you've got a hunger for some deconstruction, or some stripping down of the same brutal death metal riffing that was done far better almost 20 years ago, I can't in good faith recommend anything but the cover artwork to Worship Paganism. If the intention here was to create one of the least distinctive, least compelling death metal albums in history, then Gorevent have earned themselves a staggering success... I'd hate to think there are bands out there in the world who make Devourment seem worthwhile in comparison, but sadly the day is coming.