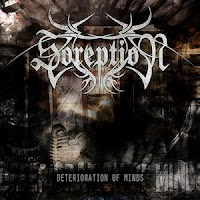 Technical death metal very often suffers from a sense of sameness wrought by so many of the constituent artists, so it's the duty of each band to try and craft their myriad physical talents into a cohesive, creative form and write some damn songs if they wish to stand out and survive. The world simply can't support every Necrophagist or Decapitated to come along and attempt to 'up' the ante on skill over substance, and once technical 'extremity' reaches a level of Origin, or their shallow, terrible shadow-dwellers Brain Drill, you're really at the reaches of human constraint as far as performance.

Enter Sweden's Soreption, a band that by all accounts have little originality of their own, yet somehow carve out an entertaining debut that lurches along like a primordial beast on silts, overstepping most of the genre traps that leave so many of these bands stranded in mediocrity. Essentially they're a mesh of the two bands I listed earlier, Decapitated and Necrophagist, but while they're not quite on the level of the former in songwriting skills, they take the chug chug arpeggio squeal formula of that latter, highly overrated band, and squirt it into a functional whirlwind of momentum that ultimately creates an enjoyable ride. They're fairly young as a band, having only the 2007 EP Illuminate the Excessive before this, but if professionalism is any indicator, they should be turning some heads amongst the fan of modern, precision battery. There is nothing really 'old school' about this, unlike many Swedish death metal bands. You'll recognize the squeals and chugging, but they have far more in common with kin Visceral Bleeding or Spawn of Possession than the wave of Dismember and Entombed worshipers that sill pour out of that nation.

Immersion begins almost immediately as a rapid swell of dark ambiance dissolves into the acrobatic ballistics of "Suppressing the Mute", which feels like Meshuggah and Decapitated got drunk one night and accidentally swapped songs, playing each with their own personal interpretation and then mashing them back up. A lot of interesting little hooks that more importantly keep the listener hooked, but the song is not without its nuisances (a few of the chug-squeal riffs I could really do without, the actual skeleton of the rhythm is far more impressive). Most exciting here was probably the crazy tech break at around 2:10, before a brief but eerie lead. "The Hypocrite, Undying" continues the trend of extreme busywork that this band incorporates with each track, such huge and circular patterns of riffing that are fun to follow around their spherical cycle. Other tracks do not fare so highly..."Breeding Exile" is choppy but often cheap with the arpeggios that really do little for me except exclaim "Yeah we do what Necrophagist do!" But even in that song, at about 2:15 the band goes absolutely insane with this posh little rhythmic sequence that will stun you at the band's level of precision. Of the remainder, I probably like "By Venom Entitled" the most, a terrifying juggernaut of rolling potential.

I'll be candid: if you hate modern death metal, you will hate everything about Soreption. You could certainly argue that their sound is very trendy, and the band has little to none of the menace of their late 80s/early 90s forebears. They are fueled by social and psychological lyrical subjects rather than medical carnage, and they are obviously well versed on the current state of death metal popular among younger crowds. But despite any prejudice for or against the style, they are a talented lot, and fast to constrict you should you grant permission to their riff-oiled coils. Deterioration of Minds is a decent debut if you're a fan of the other bands I've mentioned in the review, or American bands like Severe Torture, The Faceless, and Odious Mortem, but may not for long hold the interest of those outside looking into this circle of (arguably) cutting edge artists.

Highlights: Suppressing the Mute, The Hypocrite, Undying, By Venom Entitled