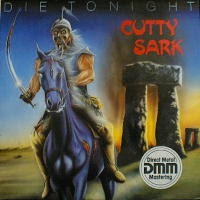 European metal in the 80s was such a fertile ground that hundreds if not thousands of quality bands would go unsung into the future. It's a damned pity, for there are so many scorching albums in those times that I could play one per day while carpooling with friends for the next...century, and still never get through a fraction of them. Oh, I could make them love me (or hate me). Cutty Sark is just such a dainty obscurity; a good band performing traditional metal who managed to pump out an EP and a pair of full-lengths from 1983-85 before hanging up their spikes & chains. They regrouped for a reunion record in '98 but by that point, there was little hope they'd be able to rekindle the fire they so obviously stoked up on this debut, and Regeneration was bourne into a world in which no-one cared, a world in which Dimmu Borgir and Emperor were the champions of the day and kids were skateboarding and listening to H.I.M., entire oblivious to prehistoric concepts such as handwriting and sexual orientation.

But let's forget all that swill for 36 minutes and bang our heads to something which fucking deserved it. Something which still deserves it! Die Tonight is the first album from the unlikely Germans, who took their moniker from some Scottish slang for a witch's undergarments (the name was also used for a famous clipper ship and a brand of Scotch whiskey). And though it may not live up to a Ride the Lightning or Powerslave, the band were clearly on the same playing field as peers worldwide like Accept, Manowar and that entire geologic era which spanned the Cretaceous outburst of NWOBHM to the Paleogene period in which the rest of Europe was swiftly infected, and beyond. Comparatively, the band has a wild, heavy metal infusion to them which is much like a Raven or a Riot. This is owed primarily to the vocals of Conny Schmidt, who is quite the find here, with a voice that never quite shrikes but soars into a wonderful avian territory when he lets it rip out over the driving guitars.

"Stupid Lies" is your basic sound of the day, with an almost R&B-like rock and roll hustle to the main riff that does little but anchor Schmidt's cravings, which he consummates with an echo and high pitched snarl to his closing syllables that sounds quite like John Gallagher. The song is harmless fun, but it is "Die Tonight", the wonderful title track that shoots the arrow straight to your heart. This is conceived as some sort of 'monster mash', in other words it features Schmidt spewing in his creepiest (lovingly accented) mid range narrative about horny demons and a devil with a sword in his hand that have taken the street to end your life, and I'm guessing have fun with your corpse after wards. The real treat is how Conny blasts out the chorus to offset the rather 'timid' verse lines, and there's a great solo to boot. An 8-minute track is not something I'd expect from a band of this sort, yet here it is, the slowly building power metal ballad "Vultures in the Air", which features some of Schmidt's most over the top, shrill vocals above a series of grooving, metal riffs and clean guitar segues. Trust me, this one is a lot more powerful than you are thinking, even when he offers more of his corny sounding narratives between the arches of his throat expanding so that he calls down the sky.

I promise, though, that nothing else here is quite so...unexpectedly profound as that epic. "Jam to the Ramp" is your typical middle class, thundering blues metal lament, get off work and coat your throat with whatever poison is available and whistle at the women as they pass, and "Hands Up" burns along like a very early Maiden (with Paul Di'anno), though Schmidt is far more uncouth and unbalanced in his delivery. "October Holidays" also reminds me of an earlier Maiden instrumental, where the riffs would be rocking in their proto-power metal gloss, but still evoking graceful hooks that feel like you just took the train to awesome. "Down and Out" opens like old Metallica but soon shifts into another hard working middle-class boogie metal anthem, Schmidt sounding as if he's about to summon up some great balls of fire. Again, a solid effort with less than memorable results. The album closer "Burning to Ashes" is actually quite good, with a pumping bass line that carries Connie's far reaching vocals to the corners of the mental auditorium, the guitars slowly entering the stage in a procession of carefully plotted intensity that builds to a good chorus and burnin' lead.

With so much material like Die Tonight out there in the world, it's a wonder why we need any of today's latest waves of retro wanna-be bands. The style was hammered to its sad death well before the onset of the 90s, but at least these old albums lack the insincerity of today's carbon copies, strung out endlessly like a xerox set to permanent, each copy revealing less and less of that essential ink. Is it a dated record? Certainly, but dated only in its innocence and style. The production is less than perfect, but very pleasing for fans of the period...with loud vocals, abrasive guitars, never the right bass mix (which ends up endearing), and the crash of simple skin rhythms. It's seen a re-issue in 1997 that would be more convenient on today's equipment than the original vinyl or cassette, with two bonus tracks: "Hard Rock Power" is a balls out metal anthem with the expected backing vocals, very much like a Judas Priest or Accept track, but "Fire and Ice" is the better of two, with a slowly throbbing intensity and a colorful chord sequence behind the chorus. In other words, definitely the version you want. Cutty Sark is not a band you'll listen for when seeking to be impressed, but a guaranteed chunk of fun that gets strangely more sullen and powerful with "Vultures in the Air" and "Burning to Ashes". And if you can track down the whiskey while listening...all the better!