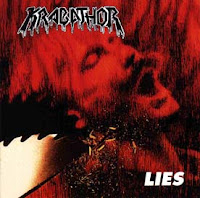 If The Rise of Brutality EP was any indicator, Krabathor were about to take a turn towards faster, more violent material, and this is certainly the modus operandi for their third album Lies, which was released through Morbid Records. Considering the speed and level of aggression the band rockets through on this album, it is a surprise the album did not explode the band into the minds and stereos of the rabid death legions of the mid 90s. But alas, 1995 was the year of At the Gates, and Lies went by pretty much unnoticed unless you made a point of carefully following all the strains of European death metal that were exploding in those years.

This may not the best of Krabathor's catalog, I reserve that honor for the more laid back, creepy atmosphere of Cool Mortification, but there is no denying the magnitude of force exhibited here. Almost all of the songs are uniformly faster paced than the band's previous work, and the tones are harsh and biting, but not without the melodic strain that has subtly cycled through the band's composition from the beginning. The band is on fire as a three piece, with Petr Krystof and Bruno Kovarik reprising their roles, joined by new drummer Pegas. Bruno and Pegas are important as they would go on to form Hypnos in 1999, another Czech death metal act well worth tracking down. The mix here feels pretty raw, and perhaps there is a little too much hiss for my personal tastes, but the guitars are good and chunky alongside the caustic distortion of the bass, and the entire experience sears like a charcoal grill in August.

The first two tracks will be familiar to anyone with The Rise of Brutality EP, but both are given re-recordings that match the compact, dense, turbulent atmosphere of this album. As such, a bit of the melody has been leached out of them, and the intensity dialed up. "The Truth About Lies" is fairly devastating in this context, though the melodic riff in the middle of "Unnecessarity" seems to lose something in the transition, but it's beefed up with a nice 10-second noise intro. Once we've struck "Short Report on the Ritual Carnage" we're into the field of new material, and the bulk track weaves between a pair of high speed death/thrash riffs that border on frenetic grinding, with a spiffy, sporadic lead injection somewhere near the latter third. "Tears, Hope and Hate" opens with a brief Pegas' rock beat, and then slower walls of magnificent, lumbering chords that set up a minor contrast to the speed of the three precedents, soon to embark on a journey of excellent, biting melodic rhythms that careen through the multi-faceted verse. In particular I love the picking of the riff before 1:30. "Pain of Bleeding Hearts" is the re-named version of "Pain That Doesn't Hurt" from The Rise of Brutality, given a little more spine and aggression here which in this case feels an improvement.

"Rebirth of Blasphemy" is one of my favorites here, opening with a gloomy pipe organ and the sound of terror to a slower, pummeling intensity. Seriously, listen to that curving riff around 1:40, and the vocals are utterly sick in the best way. The Morbid Angel-like breakdown rhythm during the solo is also excellent, if short. "Imperator (Strike Again)" has more of an uplifting, diabolical thrash pulse beating below its skin, evidence the band has not forgotten their roots, updating them to the vitriol of the era. "Stonedream" is a blast, somewhere between Pestilence's Consuming Impulse and the melodic edge of earlier At the Gates, with a little flange running through the bass and some frantic, killer schizoid riffing. The closing instrumental "Believe" seems somewhat out of place compared to the aggression of the rest of the album, but it's not the first time they've ended with one (remember the great "Temporary Being of Insignificancy" which ended Cool Mortification), but its intriguing arches of lead melody work well with the simple backing chords and establish a glorious finale.

Of all Krabathor's material, I feel that Lies would be the album that appeals the most to fans of death metal (American and European), since it moves along rapidly enough to sate the attention deficient but still has enough riffs and musicality for a fan of actual songwriting and not merely blind brutality. It's scorching and political, abandoning the traces of occult/mysticism that the band hinted at on the prior records, and I personally would award it a reliable silver medal after the gold of Cool Mortification.