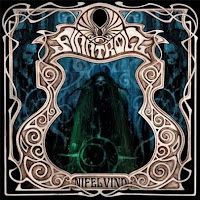 This is a review I never thought I'd be writing, as a longtime Finntroll listener since the days of their Rivfader demo and Midnattens Widunder album, but write it I must, for it seems sadly that my folk/frolic heroes may have finally jumped the shark. Now, before the canned goods start flying in my direction, for ever liking Finntroll in the first place (hating on this band is apparently the new black), let me explain that I always enjoy humorous metal when it's played straight and offers a proof of concept. Finntroll has always been one such band for me, though I feel their videos have consistently been awful, and I dread to think of any younglings thinking them any sort of representation of folk metal or extreme metal at large.

But through it all, the band still offered me a lot of laughs, since I enjoy the contrast of a black metal band going humppa and taking the genre tropes of trolls, Swedish lyrics and pagan party metal delivered with such morbid curiosity and high production values. And when you think of it, have any of the band's myriad impersonators have ever written an album worth a damn when compared to this Finntroll's catalog? I consider at least three of this band's previous albums to be classics, and yes, I even loved this album's divisive predecessor Ur Jordens Djup, which featured some excellent riffing. And that is really my beef with Nifelvind, the band's 5th full-length... through all of the atmosphere, all the orchestration, the change of costume, the rather serious tone to the album and lyrics, and the high watermark of the recording quality...there are simply not that many riffs here I have found myself reflecting upon. Yes, it's the first time I've had a Finntroll album enter one ear and exit the other.

But that didn't happen right away. My first few times listening through Nifelvind I was very taken with the immense sound. In particular the epic qualities of the orchestration used through the intro "Blodmarsch" and touched upon through many of the other tracks. "Solsagan" enters with some standard atmospheric, melodic black metal melodies and flights of the band's polka grinding, but as solidly as its delivery and the orchestral swells during the breakdown are, there is not a single riff in the song that I cared for until the melodic war metal rhythm very deep within the track (around 3:00). The percussion that opens "Den Frusna Munnen" is thrilling, and I've always wanted the band to write more music in the vein of their 'non-metal' album Visor Om Sluett, but as the metal riffs arrive, it all feels watered down and dull. Like all of its neighbors here, the song would be entirely void of interest if not for the additional instruments.

And unfortunately, this is the rule and not the exception for the majority of the album's 45 minute play length. Songs like "Ett Norrskensdåd", "Under Bergets Rot", "Mot Skuggornas Värld" and the polka-cued "Fornfamnad" passed straight through me like a morning coffee, and I found myself relying on the brooding country folk of "Galgasång" with its deep backing vocal or the spastic evil boreal surf humppa of the bonus track "Under Dvärgens Fot" (a far more entertaining take on "Under Bergets Rot") to keep me occupied. I was not even thrilled by the more epic, sweeping compositions like "Tiden Utan Tid" and "Dråp", though the former's Grieg/Wagnerian incursions were welcome.

It's rather a downer, because almost all of the technical aspects of this album are done extremely well. The band has never sounded more massive, thanks to all the multi-tracking glory and enhanced emphasis on the various vocal bombardments. The shift from natural, folksy environs to raging symphonic metal occurs smoothly, and the tones do not neglect or dishonor any of the band's past efforts. I had no problem with Vreth's vocals on the prior album, and I found them adequate here. It's simply the album's lack of 'sticking' metal material here that has dragged down the experience, and after a half dozen listens, I'm just about finished trying. It's like eating at a very expensive bistro. Your expectations run high, and the appetizer is good enough to get the gastric juices flowing, but if the main course doesn't deliver taste with all of the trappings, there is no certainly reason to go out of your way for it again.