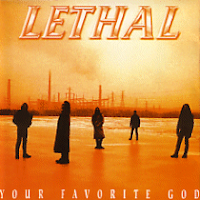 If you haven't had the opportunity yet to check out this Kentucky band's 1990 debut album Programmed, then I highly recommend YOU get with the program and hunt it down. To put it bluntly, Lethal were on course to becoming the greatest Queensrÿche outside of Queensrÿche, and I say this only with admiration, because Programmed would have made a perfect bridge between Rage for Order and the legendary Operation: Mindcrime. Fuck, I would have taken an album from the 'rÿche of equal quality to Lethal's Programmed at any point AFTER Operation Mindcrime and been happier than the endless stream of drivel the Washington State titans have been phoning in for the past 20+ years.

Well, it took Lethal about five years to get around to the follow-up to their great debut, and it arrived in the shape of this 6-track EP released through Massacre Records in 1995. This is yet another shred of evidence that melodic metal had been outsourced to Europe (and Japan) in the 90s. Grunge and death metal had taken over the American market, and its a shame a quality band like Lethal went unnoticed as early as 1990. But the Europeans kept their ears open, the band got a new deal, and an official release of the demo material Your Favorite God had finally arrived, with the same lineup save for a change in one of the guitar spots (David McElfresh replacing Dell Hull). Unfortunately, the band were unable to capitalize on the momentum of the debut, and Your Favorite God seemed to be lacking in many areas where Programmed had excelled.

First off, Tom Mallicoat's vocals seem a little strained here, and not as crystalline as his prior performance. They're not bad, and easily identified as the same man, but he seems to be decaying when he ranges out. Another nuisance is that the production feels rather weak, and through the years even more dated. The band seems to have increased the heaviness of the low end guitars as if this were somehow going to 'insert' them seamlessly into the current groove metal trends of the mid-90s (where crap like Machine Head, Metallica's Load and later Pantera reigned supreme). From a songwriting perspective, the guitars aren't all that different, except for maybe the groove-thrashing of "Hard to Breathe". It's just an added crunch that wasn't necessary when they were writing their better material.

But the biggest crime about this EP is the utter lack of memorable writing. There is no "Plan of Peace" here. No "Obscure the Sky". No "Arrival". The gleaming eagle of Mallicoat's higher range that once crested the band's excellent approach to melodic riffing had crumbled into extinction, and all we got were these stinking...no, we didn't even get a t-shirt. The worst songs here are those with the bigger low-end chug riffs like "Waiting on the Kill" or "Hard to Breathe", but when the band more closely resembles their earlier album on "Swim or Drown", or the Fates Warning-like prog rock churning of "The Page Before", they still fail to impress. "Balancing Act" and "The Real" feel very much like a Queensrÿche outtake, from either Empire or Operation Mindcrime, and though neither is impressive, they're the best tracks here. That's pretty sad when you think about it...

The band did manage to survive for one more album, also put out through Massacre the following year, known as Poison Seed, and to be fair, there are a few tracks on that which are superior to what you'll hear on Your Favorite God. Mallicoat is better there, as are the riffs, but even so, the majority of that album is also routed in the newfound groove metal of the period. Hardly essential, and it left me longing for Programmed even more. Apparently that particular adaptation failed to support the organism that was 90s Lethal, because it's the last we've heard of them (though the band still exists in some form). At any rate, you'll want to skip this and head straight for door number one: Programmed, if you haven't already done so. Your Favorite God might entertain a diehard fan or collector for a few minutes, but it's pretty much worthless in the face of the immensely superior, timeless and catchy debut.