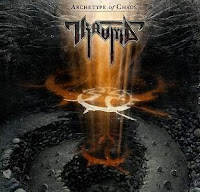 If you've been following the Polish death metal scene closely over the past decade than you likely are aware of Trauma. They could be considered one of the 'second tier' bands in that group, below Vader, Behemoth, and Decapitated that have produced their share of good albums like Suffocated in Slumber and Imperfect Like a God. They don't sound entirely like their more famous countrymen, except perhaps Vader, and also a slight affinity towards Dies Irae, Hate, and Lost Soul.

At any rate, Archetype of Chaos is their 7th full-length album and I think it is high time this band got a little credit, and perhaps a little opportunity (what I mean is: maybe some of you more popular Polish bands should offer to take this one out on the road). They're smart, they're brutal, they've got enough thrash and grooves to have human pig piles forming on violent impulses, and most importantly, they don't bore the fuck out of you with mindless guttural stupidity and no riffs. Trauma are like a hammer of stomach punching rhythms that always remind considerate of the qualities melody and atmosphere can bring to a death metal song. Fully modernized, but not at all trendy, they can lapse into a mystical rhythm that escalates you beyond the palm muted fury, and then crush your spine the next moment. I'd also like to point out that the band write good leads for death metal that cautiously complement the songs, yet still feel like they stand out rather well.

"White Architect" builds a nice intro atmosphere that instantly gives you hope that you're about to hear more than the average death record, and "Cortex Defamation" cashes in the check, with tyrannical walls of thick bludgeoning rhythms that instantly get the anger level high and the blood flowing through the limbs that then flail about like an induced seizure. Yet, amidst the crawling, battering of the guitars there are nice little touches of distorted backup vocals, and the leads after 3:00 are fantastic. "A Dying World" charges gloriously across some broiling guitar melodies and spastic bass fills before breaking down into a thick series of shifting, crunchy tempos, and "War Machine" is simply a ridiculous, fucking brutal piece which removed at least three of my vertebrae as I was listening and unable to stop from jerking around the booth, flighty arpeggios complementing Chudy's blunt chorus vocals. And from this point...it just gets SICKER.

And you're not even half-finished with the album, as the chugging of "The Slime" commences like a war between Vader and Morbid Angel (the band with the other great 'Slime' titled death metal song). The grooves here are just irresistible, especially when the bass swells beneath and an angelic synth echoes off towards the distance. "The Truth Murder" weaves a mystical atmosphere through clean guitars before its tank tread, central rhythm rolls directly across your skull, pistoning and jackhammering you down to nothing. "Tabula Rasa" is likewise immense, like a monolith slowly crushing out all of your hopes and dreams, while "Portrait of the Lies" picks up the pace for another pattern of crunching chaos, the guitar tone heavier than a thousand boulders being lobbed at you by titans. The closing track, "Destruction of the Demented World", maintains the level of aggression, but weaves in even more pensive Eastern rhythms. It's so atmospheric that you don't even realize it was the longest track here at about 7:30 minutes.

I don't know how these Polish bands do it, but they continue to conquer through both their skill at songwriting and the absolutely stunning production values. This is pure 21st century death metal, completely unashamed, and worth tracking down whether you enjoy any of the band's Polish peers or just a serious kicking of your ass. After having this album cranked to capacity, there was barely enough primordial jelly left of me to call the ambulance. Disgusting.