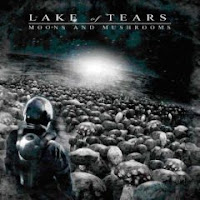 It may have taken a decade of wanderings, changes of heart and self exploration, but Moon and Mushrooms arrived in 2007 like a prince exiled after so many years, returned to his rightful kingdom as the heir to a the royal court. Yes, Lake of Tears' 7th full-length effort is probably what should have been their 4th, the natural follow-up to A Crimson Cosmos which actually metes out a stark, bleaker tone than that masterpiece, but remembers all the while that this is a metal band, and a metal album. Yes, Moon and Mushrooms crushes along the lines of the first three albums, but it also shows a clear evolution to a colder, concentrated power which topples even the band's classic crushers.

One of the other reasons the album is so much stronger than any of the past three would be that they've trimmed all the fat. There is no excess here, no filler, simply 40 minutes of killer songwriting. Magnus Sahlgren, who had been credited in helping the band perform and added a few lines to the past few albums is a core member of the band here, and you can definitely hear it in the guitars. The electronics of The Neonai or Black Brick Road remain, but in a support role, gleaming like church organs but buried deep enough in the mix that they complement the rock without ever asserting dominion. The entire album reeks of class, and it's a raging success which cleared the cobwebs of a decade. It also features a few of the band's career best songs.

The desolate strumming repetition that intros "Last Purple Sky" is joined by a psychedelic, echoing melody before a cold current of stone-washed chords, breaking down into a simple chorus in which Daniel Brennare's melodic vocals not only feel more refreshed and unique than he has in years, but offer a cool, mellow contrast to the edifice of the guitars. "You Better Breathe While There's Still Time" immediately blows the roof off with its opening verse, a killer rock hook given immediate breath by the vocals. The lyrics here are fantastic, and I like to imagine it as the ultimate vampire rock anthem, though I'm not 100% positive that's what the lyrics refer to:

The way the chorus vocals intertwine with the folksy clean guitar melody is phenomenal, and it is easily one of the best Lake of Tears tracks yet. "Waiting Counting" opens with a playful electronic line, and yet it's more spot on and psychedelic than anything from Black Brick Road, fusing into Brennare's soothing voice before the desperate and beautiful chorus erupts beneath a fantastic, minimal guitar melody. Great, moody synth suffix here as well. "Like a Leaf" is a Floydian track with another powerful chorus that makes all the difference, easily catapulting it out of reach of the dull Forever Autumn, more river rock than metal, but nonetheless memorable, lulling you into a sense of false tranquility before "Children of the Grey" arrives like a curtain of emotional, crushing ascension. By far one of the band's most powerful tracks, it functions with a simple but unforgettable mute groove the likes of which Cathedral used to knock out of the park, but spikes into an amazingly thick soup of chords highlighted by subtle organs that crash and collide like waves into the guitar hook. The breakdown is beautiful, the solo burns like a whiskey shot, the swelling psychedelic synthesizers flutter into rapture, and the lyrics and vocals rule. Brennare is at his meanest sounding tone here, and it's a trend I hope he will continue!

Doom metal and stoner rock does not get much better this, but there's a surprising amount of polish here that makes it both accessible and heavy as a pair of mating backhoes. "Head On Phantom" is another classic melodic drudger ala "Raistlin & the Rose", with a beautiful clean guitar woven through the pumping bass and passionate lyrics. The song title also rules. And just when you think the band is going to dial in some ballad, they offer another fist slogging triumph in "Island Earth", which feels quite a bit like "Shadowshires" from The Neonai, with a different payoff in the chorus, as synthesizers subtly scream across the top of the chords and Brennare's arching vocal line. Fabulous. To crown off the album is the lengthiest track on the album, the 6:25 piece "Planet of the Penguins", but just when you think it might limit itself to some bluesy psychedelic confinement, the chords build and Brennare howls painfully over the verse in ecstatic melody. To be honest, this is the one track on the album which does not feel 100% perfect to me, though it's hardly filler, and I'd take it in a heartbeat over the majority of Black Brick Road or any single track on Forever Autumn. But it remains consistent to the rest of the material here, and offers a nice exit into the mushroom-choked night.

I couldn't be happier with this astounding return to form via one of Sweden's most underrated, unique bands. Gone are the needless experiments and empty soul searching of the past few albums, the phoned in pop leanings and the identity crisis. Lake of Tears have written the sort of album I want, the sort of album that other bands simply don't do, even those close to the band in aesthetic (Tiamat, etc). I may find it a pinch less memorable than A Crimson Cosmos, but those are massive shoes to fill, and Moon and Mushrooms fills the footwear out to about the tip of the toes. One of the best albums of 2007. Please, sirs, may I have another?

Highlights: unzip the bag and pop one on your tongue.